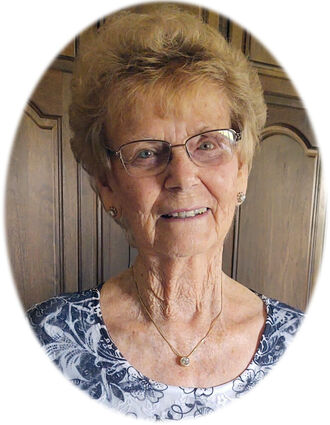 Glenice Jean Honrud, age 90, passed away the evening of February 27, 2021 after a short battle with cancer and kidney disease. She was surrounded by her children, her sister Nina, and Pastors Owen and Sherry Childers at the time of death.

Glenice was born June 19, 1930, in Lynden, Wash., the eighth of nine children. Her parents were Harry and Hattie (Bovendam) Holtrop. Harry had emigrated to the United States from Holland at the age of 18. Hattie was from Holland, Mich., so all their children were of pure Dutch descent. The Holtrop family ran a small dairy farm and raised a huge garden near Lynden, where the children attended school.

Glenice met L.O. Honrud, Jr, on a blind date in 1944. Jr and his friend, Robert Reddick, dated the sisters, Glenice and Nina, after returning from serving in the United States military forces during WWII.

Jr and Glenice were wed July 19, 1948, shortly after Glenice graduated from high school. They returned to the farm south of Opheim they shared with Uncle Lou Honrud. They resided from 1948 - 1955 at the "Honeymoon Shack" without the luxuries of running water, indoor plumbing, or electricity. They would spend the winter months in Custer, Washington, where Jr's parents lived.

In 1955, they moved a few miles farther south of that shack, to where the current Honrud farm is situated. Uncle Lou continued residing with them until the new house was built in 1974. Lou passed away in 1977. After Jr passed away on May 28, 2011, Glenice continued living on the family farm until October 2020, when she moved to Glasgow. She and her sister, Nina, shared an apartment at Prairie Ridge.

Glenice is preceded in death by her parents, Harry and Hattie; her brothers, John, Joe, Egbert, and Elwyn, and her sisters, Fern Klein and Grace Kortus.

Services were officiated by Pastor Owen Childers at the Opheim Community Church in Opheim, Mont., on March 6th at 10:00 a.m. Committal service will be at Highland Cemetery in Glasgow at 12:00 p.m.

Memorials may be donated to the Opheim Community Church, 208 Roanwood Street, Opheim, Mont. 59250.

Bell Mortuary of Glasgow assisted with the arrangements. Condolences may be left for the family at bellmortuaryglasgow.com.