Arctic Air Chills the Country as Far South as Texas 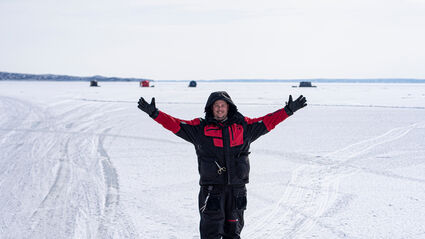 Helena Native and visiting ice fisherman David Sheridan, shows off the spread of ice huts he and his eight buddies from the Capital City brought to check on the Laker bite over the bitterly cold weekend. One benefit to the long cold spell is the thickness of the ice on Fort Peck has become safe for recreating for the time being.

An Arctic Air Mass moved in from the north and settled over much of the United States during the last week and a half bringing with it dangerously low temperatures and wind chills across all of Montana. The bitter cold arriving in early February seemed especially harsh in northeast Montana and snapped Valley County out of a relatively warm and mild January and into more than a week's worth of continuous sub-zero temperatures giving the region its first prolonged taste of Winter so far in 2021.

According to the Glasgow Weather Service the temperature was below zero in Glasgow for 230 straight hours beginning 8 p.m. on Feb. 5 and ending at 11 a.m. on Feb. 15 just 10 hours shy of 10 straight days of minus zero-degree weather. At times the ambient air temperatures dipped as low as the negative 30s and wind-chill warnings predicted temps down into the negative 50s in some cases. One of the coldest temps reported by the weather service over the 10-day period in Northeast Montana was negative 42 degrees F at Winnett on Feb. 12 without the wind chill.

The Weather Service issued dangerous temperature warnings that spanned the entire sub-zero period of time warning against the possibility of frost bite in minutes, educating the public against hypothermia and even offering up tips for winter survival not only in the field but in the household as well. On their social media accounts were posts where they encouraged residents not only to dress appropriately for the weather but also to leave a slow trickle of water coming out of the faucet to prevent their pipes from freezing up.

The event grounded flights in Northeast Montana, with Cape Air announcing last week it had suspended all air operations through Feb. 15 due to continued extreme cold temperatures in the Montana Region. Customers with cancelled flights were encouraged to rebook for no fee before Feb. 21 or to seek a refund.

The cold even delayed schools in Valley County with classes beginning late in Frazer, Opheim and Nashua over the bitterly cold weather last week. Road conditions were also bleak as the cold winds layered roads with snow and ice. At times winds exceeded 20 mph and gusts were forecast up into the 25-mph range adding to the already dangerous conditions.

Northeast Montana was not alone in below normal mercury readings. Governor Greg Gianforte issued an executive order on Feb. 12 declaring a state of emergency to open up resources to ensure Montanans reliant on propane or oil to heat their homes would have the resources available despite the extreme conditions.

"Montanans have seen harsh winter weather this week, affecting families who depend on propane and heating oil to warm their homes," Governor Gianforte said in a statement released with the order. "This executive order will ensure the timely and necessary delivery of petroleum products so that Montanans can continue to heat their homes."

In effect the order temporarily suspended regulation limiting the number of hours a carrier of such resources could be on the road. Allowing them to travel slower for longer in the "extreme road conditions" that were seen over the last week. It cautioned that the carriers were still responsible for operating their vehicles in a "a safe and prudent manner, and that 'hours of service' requirements must be followed if a driver needs immediate rest."

Temps dropped low across the country as well. One of the hardest hit states was Texas. Icy road conditions-a rarity for the Lonestar State-caused a deadly 133-car pileup in Fort Worth on Feb. 11. According to the Dallas News, six people were killed and dozens taken to the hospital following the crash, which included multiple semis and other large vehicles. It was a single event in a long list of motor vehicle accidents resulting from winter weather across the country.

In other areas as well, power outages led to millions being left in the dark and the need for backup generators at hospitals and grocery stores. According to the Weather Channel, two deaths were also blamed directly on the weather-a 50-year-old Texas man died from a fall on the ice and a homeless man was killed by apparent exposure to the weather. A Harris County, Texas family was also hospitalized after Carbon Monoxide poisoning from using a charcoal grill to heat the interior of their home.

After widespread concern about Texas' power became an issue, Abbot was tweeted out on Feb. 15, "The Texas power grid has not been compromised. The ability of some companies that generate the power has been frozen. This includes the natural gas & coal generators. They are working to get generation back on line."

In the forecast, the weather will continue to improve slightly in Northeast Montana over the next few days. As of Feb. 16, the forecast called for highs reaching into the mid-30s and lows in the teens by the weekend. 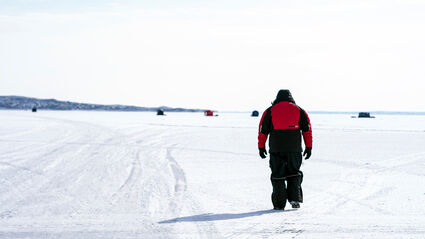 Sheridan makes his way back out on the ice to check his lines and continue searching for Lake Trout.