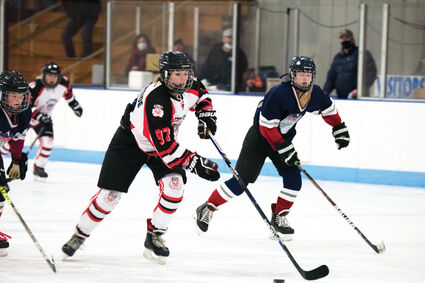 The 19U Ice Dawgs celebrated Elizabeth Nyquist and Shanice Lagerquist in dramatic fashion this weekend, giving them three wins at home over the visiting Salmon Rapids. S. Lagerquist racked up five goals and one assist over the weekend while Nyquist notched three shutouts and and an assist from between the pipes.

S. Lagerquist kicked off the action Friday night, scoring the Ice Dawgs' first goal with 4:20 to play in the first quarter of their first game against Salmon. She was assisted by Captain Tatum Provencher and Ava Lloyd to put the Dawgs up 1-0 when the buzzer sounded signaling the end of the first period.

Kylie Lagerquist netted goal number two for Glasgow with help from Klaire Krumweide on a power play 40 seconds into a Rapids' tripping call. Kimber Dulaney took the Dawgs to a 3-0 lead on a power play goal midway through the second with an assist from Provencher. The captain got her third assist of the game when K. Lagerquist found the back of the net again in the third period, giving the Dawgs the 4-0 victory.

Nyquist faced 19 shots on goal as her teammates fired 37 pucks at Rapids goalie Kendall Loughran. Salmon had five infractions in the game while Glasgow was sent to the penalty box three times. Provencher took a roughing call in the first while S. Lagerquist, checking, and Lloyd, hooking, took seats in the third.

In their game Saturday morning, the Dawgs won 5-0. Provencher found the back of the net first, on an assist from S. Lagerquist midway through the first. K. Lagerquist scored the insurance goal with 3:56 to play in the first on an assist from Tori Pehlke. S. Lagerquist, assist Provencher, scored the lone goal in the second period. She added a power play goal with 3:06 left to play in the third with help from Dulaney. The Dawgs final goal came from K. Lagerquist, assist Krumweide, with 2:30 remaining.

Each team was called for four infractions. Provencher and Lloyd were each sent to the sin bin in the second period for tripping, while K. Lagerquist served time for slashing before intermission. She also served time in the third period for unsportsmanlike conduct after a Rapids hit left S. Lagerquist slow to regain her legs. Nyquist saw only 10 shots on her net as the Ice Dawgs offense combined for 42 attempts at the other end of the ice.

The teams returned to the ice that afternoon for their final face off of the weekend. Glasgow put seven pucks in net after getting shut out in the first period, four of which came on the man advantage. Glasgow's first goal came with 14:34 left in the second from Krumweide on a Salmon tripping call. She added another power play goal just over five minutes later on a Salmon interference call. The assist came from Nyquist in the crease. S. Lagerquist scored the Dawgs' third goal of the game 30 seconds later. Phoenix Phipps, assist Lloyd, put the puck past Loughran for Glasgow's fourth goal with 6:47 before intermission.

Glasgow added three goals in the third. Krumweide nailed the hat trick on a power play at 12:03. Pehlke, assisted by K. Lagerquist, added another PPG with 6:13 to play and the Dawgs' weekend ended as it began, with a goal from S. Lagerquist. Krumweide added the assist on the even handed goal at 2:32.

Salmon had five penalties in the game while Glasgow had four. Lloyd and Dulaney each served two minutes for interference in the first period. S. Lagerquist was called for tripping in the third and Phipps served time for the team's too many players on the ice call. Glasgow had 38 shots on net while Nyquist turned away 26 attempts on her home. 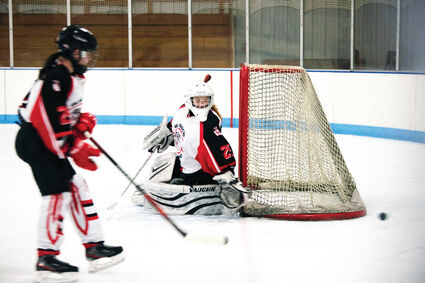 Ice Dawgs goalie Elizabeth Nyquist eyes up a puck that went wide of her net during Glasgow's game against the Salmon Rapids Jan. 16.