Boys and Girls Basketball Season to Kick Off in Jan. 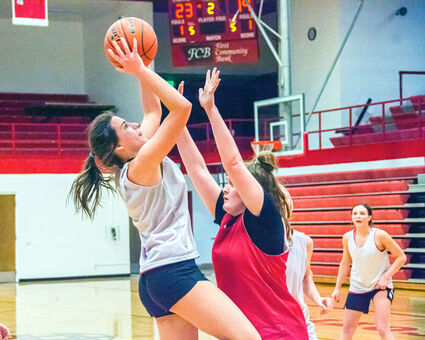 The Glasgow Scotties hit the hardwood floor for their annual Red and White Basketball scrimmages last Tuesday evening, Dec. 22. In keeping with 2020, this year's scrimmages were different - no spectators were allowed in due to the continuing coronavirus pandemic. The matches were broadcast on NFHS, as will be the rest the of the season provided all schools have the capability to film the games.

The scrimmages were a preview of the basketball season to come, giving coaches a chance to see their players in action beyond practice drills. Action for both teams started with the C squad matching up against the junior varsity, followed by the JV team taking on the varsity.

The boys hit the court first, under the direction of second-year head coach Paul Yoakam, assisted by Patrick Barnett and Sam Tedrow. Though it took the six varsity players a bit to loosen up and catch up with the JV players, they took a 24-12 lead after the first 10 minutes of the running clock. After another 10 minutes, the aggressive veterans posted a 39-18 win.

"I'm excited to start a season, thankful we have one," Yoakam said. "I"m really happy for my seniors, who get to have one." Having a season, however delayed, appears welcome by a number of players. Glasgow has 20 kids out for basketball this year, including eight freshman, allowing the coach to go pretty deep into the line-up if needed.

Yoakam is returning six players who have experience at the varsity level. The team has some height in Keigan Skolrud, who the coach refers to as the "premier big man in the league." The first team all conference post will center the offense which Yoakam says will feature a lot of in-and-out play.

With their height and average speed, Yoakam says his is a half-court team but he expects to push it a lot more, working on the transition game. He praised his guards as "really unselfish" players who work really well together and will be able to draw the ball to the perimeter to prevent double teams on the big men in the center. The outside players "know when and where the ball needs to be."

Defensively, expect the Scotties to focus on man-to-man, "lots of chaser defense," with quite a bit of trapping. With his crew, Yoakam says the base defense will be man with not a lot of zone. Though the varsity Scotties appeared slightly tired at the end of play with only one sub available, Yoakam is not concerned about conditioning for his guys. "We have time yet," he said.

After the boys showcased their skills, it was time for the girls to take to the court under the direction of head coach Travis Nielsen, and assistant coaches Cami Graham and Jami Hughes. Nielsen's varsity crew currently sits at eight strong. "As players develop, we'll have more," he said.

The teammates communicate well on the floor, keeping up a steady stream of chatter as they adjust on the fly. Though they started off the night in 2-3 zone defense, Nielsen expects to make use of all his options. "With the personnel we have," he said, "we'll be playing all defenses - man-to-man, zones - a good variety of defenses."

With the team topping out at 5'11" Nielsen will need to make use of those defenses. Solidly in the mid-range for height for the area, Glasgow's eight varsity members range from Carly Nelson's 5'11" down to Blaire Westby's 5'3". Glasgow's height also ensures the team will play a mixture of offenses, with Nielsen planning his options between guard and post play.

Offensively, the team is looking for quicker transition play this year but without turning away from set play. "My girls know if they can't transition to pull out and set up the offense," the fifth-year head coach said. "We will run as much as we can and know when to set up plays when we can."

Indeed, the Scotties looked to the net often in their scrimmage, unafraid to shoot. The team also crashed the boards often and hard, knowing aggressive play might make up in part for any height disadvantages they might face this season. 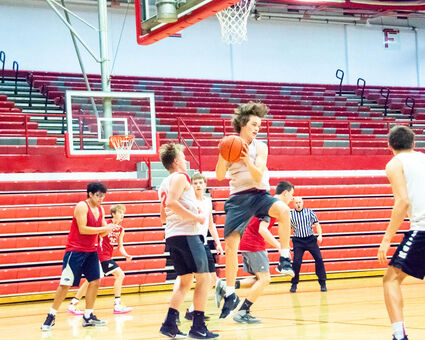 Vincent Chappell hauls down a rebound in the Glasgow Scotties Red and White basketball scrimmage on Dec. 22.