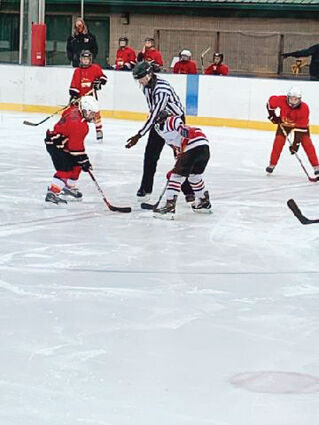 JP Cornwell taking the face off against the Flathead Flames on Dec. 19.

Glasgow hit the ice for game one at 8:30 a.m. on Saturday and wasted no time putting goals up on the big board. Brock Ciarfardone struck first for Glasgow with help from Gryffin Collins and Carter Holte. Brody Hansen was not far behind, lighting up the lamp 22 seconds later for a 2-0 lead. Hansen would assist on Glasgow's third goal, lending a stick on Landon Honey's goal. Reilly Llewellyn, with help from Collins, took Glasgow's lead to 4-0.

The Flames' Kyle Harrison put the home team on the board with 5:36 remaining in the first, before Glasgow closed out the period with two more goals. Hansen, with help from Collins, scored the Dawgs' fifth goal. Glasgow ended the period with a 6-1 lead on a goal from JP Cornwell.

Both teams would put up a goal in the second for a 7-2 Glasgow lead going into intermission. Honey extended the Dawgs' lead early in the period and Tara Hern added a Flames' goal with only 32 seconds left in the second. Glasgow found the back of the net twice more in the final period of play. Collins would score his own goal and Hansen added a short handed goal to give Glasgow the 9-2 victory.

Dawgs' goalie Jacob Potter faced only 10 shots in the game. His teammates had puck control in the contest, firing 41 shots at the Flames' netminder. Flathead was called for only one penalty in the game, while Glasgow served time for two infractions. Honey served time in the second for hooking and Ella Ross sat in the third for interference.

The Dawgs and the Flames faced off again at 2:30 that afternoon and Glasgow again proved the dominant team, notching another seven-goal victory margin. Hansen found the back of the net first in the game, scoring on an assist from Honey. Flathead evened the score less than a minute later when Fenton Liebe-Cohen scored the Flames' only goal of the season with an assist from Alexander Bucklin. Hansen gave the Dawgs the lead back just over four minutes later. Honey netted a shortie to give Glasgow their insurance goal and a 3-1 lead to end the first.

Hansen added two more points in the second period, assisting on Cornwell's goal and scoring his own. The Dawgs took a 5-1 lead into intermission and added three more goals in the final period. Collins struck first in the third on an assist from Cornwell. Llewellyn added the penultimate Dawgs' goal on an assist from Honey. The scoring was closed out by Hansen who netted a power play goal midway through the third period.

Potter saw 13 total attempts on his net and his teammates threw 32 pucks at Flames' goalie Zayne Newman. Flathead again limited their penalties to one. Glasgow played a cleaner game, sending Hansen to the sin bin in the first for checking and the Dawgs' lone penalty.

The PeeWees will return to the ice on Saturday, Jan. 2, after the holiday break, hosting the Havre Ice Hawks at the Valley Event Center for a 2 p.m. game.