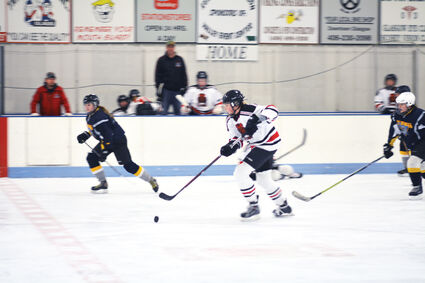 Ice Dawg Klare Krumwiede moves the puck down the ice during a game against the Havre Ice Hawks last season.

The 19U Ice Dawgs traveled to Bozeman for a trio of games against the Icedogs Dec. 19 and 20, coming home with two victories. The Dawgs took the first game after a third period rally, dropped the second, and came back to win the final game with a shut out.

In game one Saturday, it was Halle Hunter who found the back of the net first, on an assist from Shanice Lagerquist in the first period. Bozeman tied the game with 3:03 remaining in the period. Tori Pehlke, with help from Kimber Dulaney, gave the Dawgs the lead back in the second but Bozeman again tied it up before the buzzer.

Kylie Lagerquist started the third period scoring, on an assist from Hunter. The Icedogs tied the game minutes later. The teams battled it out for the remainder of the game until K. Lagerquist lit the lamp with under 30 seconds to play with help from Hunter and Ava Lloyd. The late goal gave the Dawgs the 4-3 victory.

Bozeman had two penalties in the game and Glasgow sent a player to the box each period. Lloyd took a seat in the first for tripping, and S. Lagerquist served time in the second and third periods for roughing. Glasgow put up eight shots in the game while Dawgs' goalie Elizabeth Nyquist turned away all but three attempts on her net.

The Icedogs came out ready for revenge Saturday morning, and the final score of 7-3 reflected their desire to defend their home ice. Glasgow took the lead first on a goal from Pehlke before Bozeman put up two goals on their side of the scoreboard. Hunter, with an assist from Pehlke tied the game before the end of the first.

K. Lagerquist put up the only Dawgs' goal in the second while Bozeman found their way past Nyquist twice more to take a 4-3 lead into intermission. The third period was all Bozeman, who scored three more times for their win. Nyquist faced 49 shots between the pipes while her teammates lobbed 22 pucks at the Icedogs goalie.

Glasgow had four penalties, all served in the second period while Bozeman had three infractions. Klare Krumweide was called for a roughing and misconduct, while K. Lagerquist and Lloyd served time for tripping in the Dawgs' box.

Sunday morning's game saw fewer goals and more penalties. Bozeman racked up eight infractions while Glasgow was called for six. The Icedogs outshot the visiting Dawgs 21 to 24, but Nyquist turned away all attempts on her home for the shutout.