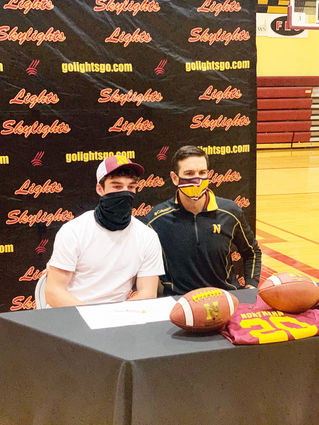 Glasgow star running back Jesse Lee announced via Facebook on Nov. 18 that he has committed to playing football for MSU Northern next season. Lee was a force for the Scotties, driving their ground game down the field weekend after weekend this season, often carrying opponents' defensive players along with him. In his announcement, Lee expressed his gratitude to all the coaches that made his football career possible.

Lee told the Courier he chose Northern "because of how close it was to home..." while also feeling their coaching staff held a vested interest in his value as a player. "I also feel like I'm not just hoping to be a practice player at Northern," he added.

The running back said he is looking forward to playing his teammates from high school at the next level. Lee was just named to the Northern B All-Conference 2020 1st Team Offense team, recognizing his outstanding play this season. The senior from Hinsdale said his favorite memory as a Scottie "is probably just eating team dinners with my friends."

Lee will be playing basketball and running track for the Hindale Raiders this year. He has not settled on what he will be studying at MSU Northern, but said football will be the only sport he will be participating in at the collegiate level.