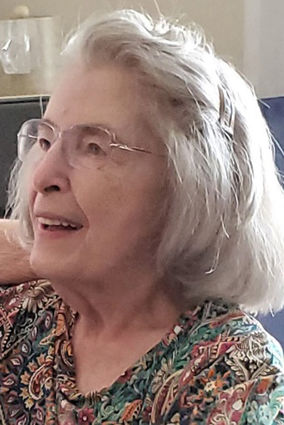 Funeral services are delayed until Spring 2021, at which time a mass will be scheduled at St. Thomas the Apostle Catholic Church in Billings, followed by a graveside ceremony in Glasgow, Mont.

Delores was born and raised in northwest Minnesota's Red River Valley: the land of "Uff Da!" Her childhood was very happy, filled with family gatherings at her Swedish grandmother's house, chores, and lessons learned from simple life on a farm. She was the oldest of Frank Stroble and Hazel Cook's three children: Delores "Dee," Frank "Bud," and Dorothy "Dot." Her mother was a brilliant seamstress who crafted such lovely clothes that young Delores was scarcely aware of the economic hard times. She was strong and athletic, crediting her early physical prowess to farm work. But academics were her first love - writing in particular - and she excelled in school. Upon high school graduation, she was recruited, with a full scholarship, for a new psychiatric nursing program created in anticipation of the needs of returning WWII soldiers. She participated in the program, soaking up knowledge that served her well in life, but ultimately chose not to pursue psych nursing. Instead, she moved with her family from the Minnesota farm to the oil fields near Cody, Wyo. There, the family found financial prosperity until her mother's untimely decline and death.

After time back in Minnesota attempting to heal that wound, the family again moved West: this time to Glasgow, for a business opportunity with relatives at the Star Motel. In Glasgow, Delores met and married local rancher Mark Etchart and together they built a good life, filled with raising five children and consistent service to the community: Mark in local politics and Delores in various Catholic and civic organizations. Delores always engaged her creative talents - both in writing and illustration - as part of her service. She was well known as being "the writer" of any group, and she also used her writing skills to comfort countless friends, family, acquaintances, and strangers with sympathy cards or personal encouragement during times of hardship. She also enjoyed some professional writing success, with published articles in several newspapers and magazines. Additionally, Delores combined her early interest in psychology and her enduring interest in writing by studying handwriting analysis and becoming a Graphoanalyst.

But above all, Delores was everyone's moral compass.

Delores was preceded in death by her husband in 1992 and their beloved firstborn, Kathy, in 1969.