Advance to Class B Quarterfinals Against Columbus 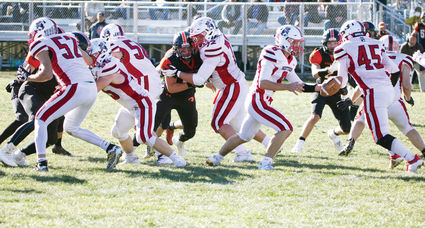 Loden Idler prepares to hand off the ball against Eureka on Oct. 24 in the Scotties' first round of post-season play. Glasgow defeated defending State Champs Eureka 28-6. They play Columbus at home on Nov. 7.

The Glasgow Scotties football team brought home a huge win in Eureka on Friday against the Lincoln County Lions. That win means the Scotties will be on home turf this Saturday, Nov. 7, to face the Columbus Cougars. And to say the Scotties are pumped for the game would be an understatement.

"I am expecting the greatest rematch of the century," Tel Aune said.

"I know we want revenge on them for taking us out of the playoffs last year but now that they're on our turf I think it will be a whole different story." Ty Kittleson commented.

"I want to beat them really bad after our loss to them last year in the first round of the playoffs," Jesse Lee, "and it will feel even better to do it in front of our home town crowd!"

"I think we are looking forward to our rematch with Columbus but this time at home," Loden Idler "Last year they beat us in a heart breaker and this year we are stronger physically and mentally so I think it should be a really good game."

Glasgow lost their first round playoff game against Columbus just over a year ago, Nov. 2, 2019. The Cougars defeated the Scotties 28-24 after capitalizing on Scottie mistakes. Now, the Scotties are eager to avenge that loss in Columbus with their first appearance in the quarterfinals since 2014. The victory over Lincoln County marks the first playoff win for any member of the Scottie team.

The Scotties made their intentions clear early in the game in Eureka, promising a strong defensive show augmented by their running game. Glasgow's defensive line put an early end to Lincoln County's first possession, forcing a three and out and taking back the ball midfield. Loden Idler went to running back Jesse Lee immediately. The two made big gains down the field thanks to their offensive line.

With all eyes on Lee, Idler faked to draw the defense then threw a 20-yard pass to Tel Aune for a Scottie touchdown with 5:19 left in the first quarter. Idler kept the ball and punched it in to add the extra two points and give Glasgow an 8-0 lead early in the game.

Back in control of the ball, the Lions sought to even the score. But standing in their way was a defensive line composed of Cooper Larson, Dylan Nieskens, Aune, Kittleson and Mayson Phipps. The Scottie boys proved far more formidable than the Lions and ended their second possession.

Lee was pushed back up the field before the quarter ended. The second quarter started with Scottie hearts in their throats as Idler was tripped up right outside Glasgow's end zone and the ball went loose. Fortunately, Larson came up with the ball to save the Scotties from a turnover, but Glasgow was not able to make it to the end zone and was forced to punt the ball from their own end zone.

A personal foul after the kick moved the ball up to the 8-yard line and put the pressure on the Scottie defense. Phipps made a big stop right at the line as the Lions attempted a quarterback keeper to keep the Lions out of the end zone.

With Glasgow back in possession, the Scotties began their moves down the field to the other end. With 4:13 left in the half, Idler put on a show, running the ball 76 yards for a touchdown. A throw from Idler to Kyler Hallock for the two-point conversion was stopped, giving Glasgow the 14-0 lead late in the first half.

The Lions would battle back, sensing the victory slipping away from them. Their 99-yard drive would end in a touchdown, bringing the score to 14-6 after a failed two-point attempt. The Scotties answered back, with Nieskens and Lee carrying the ball. With just 9 seconds remaining in the half, Idler connected with Colten Fast on a 45-yard throw for the Scotties third touchdown of the game.

Idler limped off the field with an apparent lower leg injury and Mason Donaldson would enter the game to finish out the play. Donaldson handed the ball off to Lee who punched through the Lions' defense for a successful two-point conversion, giving Glasgow the 22-6 lead.

The second half in the 54 degree weather would prove to be a defensive battle as the two teams exchanged possessions without scoring. Glasgow would end the quarter in possession and begin their most dominant drive down the field. The Scotties would continue racking up first downs to start the fourth quarter, eating up the game clock. The drive culminated in an Idler-to-Lee touchdown to extend Glasgow's lead to 28-6 with just over 10 minutes to play.

With just over a minute left to play and standing a half-yard short of the first down, the Lions throw was picked off by Idler. Glasgow entered victory formation and Idler took a knee to run out the clock. The Scotties celebrated their first play off win in six years.

Lincoln County had 202 total yards, and were held to 1.38 yards per carry. Idler and Taylor each had an interception. Phipps had seven tackles, 3.5 tackles for loss, one sack and one forced fumble. Nieskens had eight total tackles and Aune racked up 10 total tackles.

Hallock told the Courier the "best part of the game for me was just being out there mostly on defense and stopping them from scoring more than one time. It was awesome." Fellow defenseman Nieskens also said, "The best part for me was holding them to 6 point the whole game."

Aune said his favorite part of the night was "celebrating with the team and the crowd after the game ended." Armed with a boost of confidence according to Nieskens, the team is ready to move forward. Kittleson echoed his teammates, "The best part was looking at my teammates after the game and realizing the work we've put in all season is paying off. It's a huge confidence boost to go all the way up there and knock of a team as good as Eureka. I think Columbus will be a very intense game." Aune added, "(Columbus) is good and we as a team have to respect that and study film and go to work this week."

"It feels awesome to have the feeling of hard work and dedication pay off," said Idler of his team's performance. "We aren't slowing down and there is plenty more to come from this year's Scotties."

That "plenty more" will happen this Saturday, Nov. 7, at home. Glasgow hosts the Columbus Cougars at Scottie Field with a 1 p.m. kickoff. The game will be covered by NFHS and KLTZ.

Gates will open at 11:45 a.m. The MHSA has limited attendance for playoff football. Each uniformed player will be allotted six tickets, each manager will be allowed four tickets, and coaches and cheerleaders will be given two tickets each. These limits apply to the GHS student body and children of all ages. In order to attend the game, either in the grandstands or by vehicle, persons must be on the official ticket list.