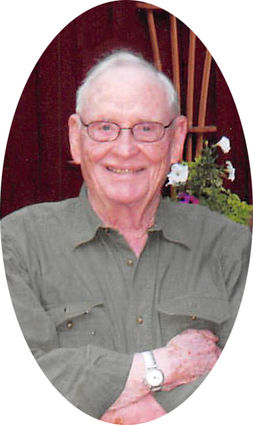 Visitation will be Thursday, Oct. 29, from 8 a.m. to 1 p.m. at Bell Mortuary in Glasgow. Graveside services are planned to follow at 2 p.m., at Highland Cemetery in Glasgow with Pastor Bonnie Novak officiating.

A memorial service is planned for the spring.

Ed was born on a farm south of Opheim, Mont., on Sept. 21, 1929, he was the third child of Harry and Florence (Wagner) Reddick. When he was six, the family moved to Opheim so he could attend school. In 1948, he and Freddie Letterman decided to join the Army, in Fort Ord, California. After basic training, he attended typing school.

He was later transferred to Fort Riley, Kan., where he met the love of his life, Mary Pickett, from Junction City, Kan. The couple was married June 11, 1950. During his time in the Army he was stationed in Korea and Okinawa. He was discharged January 1954.

The couple moved to Opheim, where he bartended for Turk and Alma Jean Williams at Turk's and also worked for the Railroad. In 1959, Ed went to work for the Corp of Engineers at Fort Peck, first as a laborer for $1.99 an hour, later as a truck/heavy equipment operator. He said the strangest thing he ever had to do was dig a hole and bury a buffalo.

Ed bowled for years in Nashua. He was a devoted fan of basketball for the Nashua Porkies, the Opheim Vikings and the Glasgow Scotties – attending games for many years.

In 2019, he broke his hip and he wasn't able to go any more. He really missed the people and games.