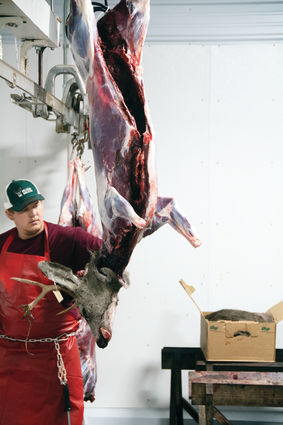 Travis Austin processes a deer at Hi-Line Meats' new facility beside the VFW on Highway 2 in Glasgow. Hi-Line Meats has been open for less than a week in their new location and are already hard at work for this year's hunters.

"Busy, very busy," said Brian Austin on how work was going at Hi-Line Meats which opened in a brand new facility on Oct. 24 in Glasgow. Situated on Highway 2 beside the VFW, the small facility was packed with workers and wild game two days later. Austin, who has been cutting wild game for 32 years in Glasgow and also manages the Valley County landfill, is hitting the ground running with his partner, Danny Zeiger, who also works in the oilfields in North Dakota.

Austin had rushed to get the new building up and ready in time for hunting season. Right now the business is focused solely on processing wild game meat, with any number of meat hooks and knives flashing through the air. The new building was facilitated, in part, through the Montana Meat Processing Infrastructure Grant, under the federal CARES Act. Governor Bullock announced on Sept. 23 that an additional $4.2 million would be going to small and medium-sized meat processors to help local businesses respond to the COVID-19 crisis.

Austin said his business applied for the grant the first time it was offered by the state, but did not win the award while local business Treasure Trail Meat Processing did receive funds in the first round of aid distribution. When the state announced a second round of funds would be available, Austin applied again. "We got the second one," he said. Hi-Line Meats, which employs two to three people throughout the year and more during the busier hunting season, is using those state funds to their purpose.

"We're just trying to be part of the solution," Austin explained. Hi-Line Meats intends to continue their processing work to contribute to a "sustainable, local food source" for Valley County and the surrounding area. Nestled in a strong hunting and agriculture community, Austin and Zeiger should not be hurting for business. Between domestic animals and wild game, Austin expects Hi-Line Meats will be open "pretty regular" throughout the year. With hunting season, he predicts working for the "next six weeks straight."

Austin has long demonstrated a stereotypical Montana work ethic and pride in a job well done. "There's 24 hours in a day," he said. "You don't have to work for only eight of them." Even with the hours he put into getting the new facility up and running in time for hunting season, he knows he would not be where he is without the community's support. When asked what he wanted the community to know about the operation, he immediately listed off a number of businesses and individuals who assisted him. "Danny Carney, Adam Arneson, Tyler Malnaa, John Kulczyk, Dale Plumping and Heating. Dennis Young of D&S Electric. Especially Dennis. Too many to mention really," Austin said. The support from the community and "all the people in town got us up to speed and got us going," he added while continuing to mention businesses such as the lumber yards in Glasgow.

Austin continued that the goal of the business remains to be part of the solution to the problem the nation faced after the coronavirus pandemic hit: the delicate nature of the food supply chain. "So many people are worried about getting their product and knowing where it came from," he noted. One upside of the pandemic has been a renewed focus on local food sources and Hi-Line Meats find themselves in a good position to provide exactly what people are looking for.

Hi-Line Meats will service Valley County and the surrounding area, including out-of-area hunters who come to take advantage of the benefits offered by northeast Montana. Beyond wild game, Hi-Line meats will be taking domestic animals as well. "We're going to try to lighten the load," Austin said, noting the uptick in business for other meat processors such as Treasure Trail and Pay-n-Save in Saco. "Some of those guys are five to six months out."

Austin said a renewed focus on local and sustainable food sources will keep all the processors busy. Indeed, a Billings Gazette article from late September, "Montana Hunters May Have to Search for Meat Processors This Fall," highlighted that wild game butchers will be in demand as more ranchers have turned to local meat processors to process their cattle. A butcher out of Butte is predicting that 2020 will be one of the best years for butchers in 20 years.

Governor Steve Bullock highlighted in his press release announcing the recipients of the second round of grant funds that the grants will help meat processors "expand their capacity to meet increased demand for local meat and protect consumers from future supply chain disruptions." If the demand seen in Valley County is any indication, Austin can expect to be cutting meat for another 32 years.