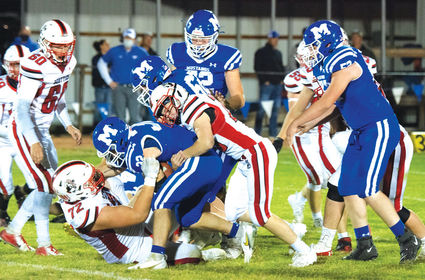 Mayson Phipps (72) and Nik Burke (r) combine on a tackle to take down Malta's Rex Williamson in Malta Oct. 9. Williamson had four touchdowns in Malta's 36-14 win over Glasgow.

The Glasgow Scotties traveled to Malta this past Friday night, Oct. 9, to take on the Mustangs. Glasgow went into the game with the intention of ending a three-year drought against their Hi-Line rivals, but such was not to be the case. An early to...