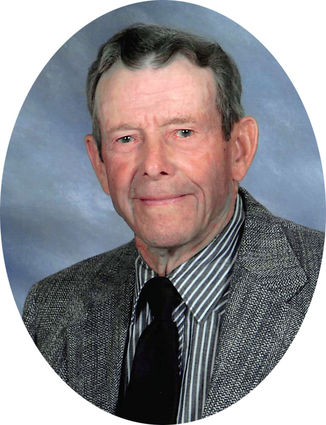 He was born on New Year's Day in 1923 in Glasgow, to Dan and Emma (Edwards) Dascher. He joined his sister, Esther and later, another sister, Lucine, joined them. They grew up on the homestead 15 miles southwest of Opheim, Mont.

Dad and his sisters were homeschooled, as their mother had a teaching degree. In 1938, after being homeschooled through eighth-grade, the family moved to Glasgow so he and his sister could go to high school. He graduated from Glasgow High School in 1942.

On Jan. 18, 1948, Dad married our Mom, Viola Florence Sylvester, in Glasgow and began farming on his own, then purchasing the farmland on the north bench. Mom and Dad took over his parent's farm, in Glasgow, in the fall of 1948 where they started their family. Susan was born first then Gary. Dad did a lot of custom farming, breaking up land, baling, and combining as well.

During the building of the second powerhouse at Fort Peck, he worked as a form builder and rod man. If there was a job that required someone small and willing to crawl into small spaces, they would say "Where's Dale? He'll do it!" After the powerhouse was built, he worked part time at the water treatment plant in Fort Peck, all while still farming.

Growing up in the '30s, he learned to be resourceful. Nothing was thrown away and everything was repaired. He served on several board of directors, including the Historical Society and Farmer's Union. He also drove bus for the Glasgow School District for 10 years. Dad's greatest pride was his 1951 Chrysler Crown Imperial. In 2016, he moved to Valley View Home, in Glasgow, and while he was able, we would escape and go for Sunday drives in his '51.

As most of you know, he loved to dance. Mom and Dad square danced for years! Mom made all their matching shirts and dresses. Many of those matching outfits were donated to the "Dirty Shame Dancers" in Scobey.

Dad retired from farming the North bench in 1992 but kept the River bottom to keep him busy. After Mom passed away in 1998, Dad continued to dance whenever, wherever he could. He would dance every dance with anyone up until his early 90s. He loved to travel all over Montana, Canada, and North Dakota to attend fiddler jams and Norsk Hostfests. Even in the later years, when confined to a wheelchair, he would dance as he tapped his toes to the rhythm of the music. Cap Holter's band was his all-time favorite.

He is preceded in death by his parents, Dan and Emma (Edwards) Dascher: his wife of 50 years, Viola; sister Esther (Dascher) Wetherbee; sister-in-law Marcella (Sylvester) Elfring; and brother-in-law Sam Sylvester.