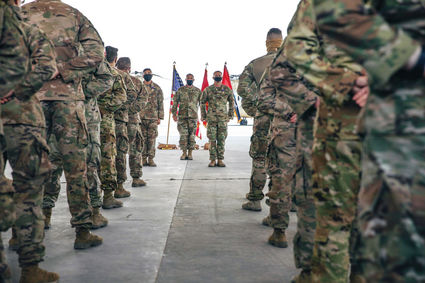 SFC Elmer "Moe" Mayhew stands center at attention after receiving the Purple Heart alongside SGT Jared Fossek (left) at a ceremony in Kuwait on Aug. 31. The two Helena based National Guardsmen were wounded in a rocket attack on March 14 on Camp Taji near Baghdad, Iraq.

On Aug. 31, the United States Army and the Montana Army National Guard recognized the service and sacrifice of two of their own in a ceremony in Kuwait. Sgt 1st Class Elmer "Moe" Mayhew, a Nashua High School graduate and member of Delta Company, 1...