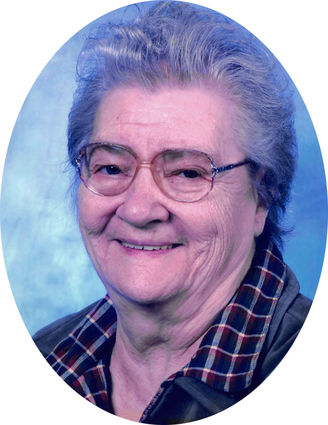 Open visitation will be Wednesday, Sept. 16, 2020 from 12 to 5 p.m. at Bell Mortuary, in Glasgow, Mont. Funeral services will be 11 a.m., Thursday, Sept. 17, with Pastor Tom Fauth officiating at the Assembly of God Church in Glasgow. Burial will follow in Highland Cemetery in Glasgow.

She came into this world on Aug. 31, 1926, at home on the family farm near Opheim, Mont., with the aid of a midwife. Elona was the youngest child of John and Frances Redfield.  Her four older siblings were Mary, Walt, Margaret, and Amelda.

Elona discovered her love of music in second grade. Her family couldn't afford a real piano, but she didn't let that stop her.  She crafted a keyboard out of cardboard and learned the keys on the piano.  The first two keys she learned to play on that cardboard were C and F. Her passion for music would continue as an occupation and a hobby until the end of her life.

When Elona was school-aged, she loved to ride horses. She would take her horse "Freckles" to visit neighbors. She also loved playing basketball and baseball. Her love for sports continued for her whole life. She was an avid fan of Michael Jordan and the Chicago Bulls and the Brooklyn (later LA) Dodgers.

Elona quit school toward the end of her junior year and moved to Glasgow to work at the Rapp Hotel. During the next couple years she moved back and forth between Glasgow and Opheim before finally settling in Glasgow, where she met Leonard Watterud. They were soon married in Coeur D'alene, Idaho, on July 1, 1945. They lived in Opheim and Glasgow and started a family. They were blessed with five children over the next 17 years; Linda, Randy, Bonnie, Dawn, and April. During this time, Elona worked at the La Casa and Roosevelt Hotels.

Leonard and Elona fostered a love for music in their children and in anyone who would listen. The pair played many barn dances and social events with Leonard's brother and eventually with their own children. Many and most nights in the Watterud home were spent with the windows wide open, neighbors dancing in the yard, playing music until 1 or 2 in the morning.  They played and worked together until Leonard's death.

In September of 1978, Elona married Maxim Krikorian. They lived in Glasgow for a time where Max owned a construction company and pastored a small church. They moved to Helena, Mont., and continued pastoring there until his death in 1989. Soon after, she moved to Kalispell, Mont., where she lived for a number of years taking care of grandbabies and enjoying her time spent with Linda, April, and Shana.

In 1994, she moved back to Glasgow.  Her son-in-law built her an apartment in Dawn and Jeff's house where she lived for the remainder of her life.  She spent her time and talents making music in the church, loving and being with family, and cooking and baking for family and social events. Everyone knew about "Gramma's buns" and wanted them at every special event.  Yes...we know how hilarious that sounds.  She had spunk until the very end and passed away in her home surrounded by family.

Our Matriarch has moved on, but her legacy will last for generations.