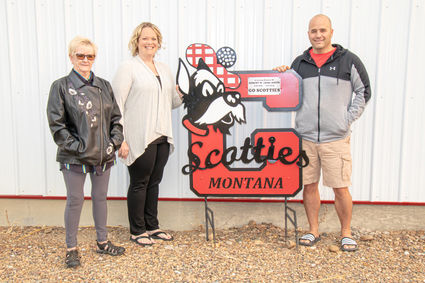 "He was the number one fan for our program," explained Glasgow Wrestling Club president Brady Flaten, "from the little kids up to the high school." The respect and reverence in Flaten's voice was obvious as he described Bob Smith. Smith passed away last year, but he was not done supporting Glasgow wrestling.

On Monday, Sept. 14, Smith's wife, Marilyn Smith gifted the Glasgow Wrestling Club with a special Scottie sign her late husband had had specially made in Seattle. She told Flaten that Bob would be smiling down on it, seeing it displayed at the new wrestling building. "That sign was his pride and joy," Flaten relayed to the Courier, noting that Mr. Smith made quite the investment.

"He was such a supporter, a Scottie supporter, but particularly a supporter of our program," the club president went on. He said the club plans to do much more within the building to memorialize Mr. Smith, but that it is nice to have the sign on the outside. The sign will be hung and displayed near the front entrance to the building, bringing a long tradition of pride in Glasgow's program to their new facility.

Harvey Wall, owner of Baker's Jewelry, will be making a plaque to accompany the sign, in honor of Mr. Smith and his longtime support of Glasgow wrestling. Flaten told the Courier Mrs. Smith had held on to the sign her husband had custom ordered "until the last minute" as she plans to move from the area. The club president was humbled by the gift, "It is a real honor to have Marilyn donate it to us."

Mr. Smith may have passed, and Mrs. Smith may be leaving Glasgow, but a significant part of their love remains, forever on display at the Glasgow Wrestling facility.