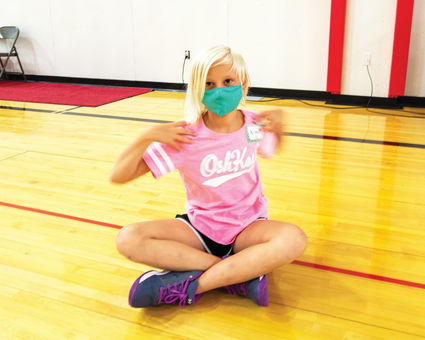 A masked camper imagines herself as a washing machine in the yoga class which closed out the first day of the Fort Peck Summer Theatre's Performing Arts Camp on Aug. 4.

Than a camp with friends"

The camp cheer from the Fort Peck Summer Theatre's Performing Arts Camp sums up how staff and campers are making the most of their experience this year in the midst of the global coronavirus pandemic.

Of course, this year there have been some adjustments, bringing the camp into compliance with county, state and federal health recommendations. The camp normally welcomes many more campers. Last year, about 80 kids and teens attended. This year, registration was limited to 54. Limiting the number of campers allowed for more effective social distancing and relieved some of the strain for those running the camp.

Camp director Megan Wiltshire explained that the camp is running at about half staff this year because many of the normal troupe returned to their homes after the 51st season of FPST was canceled. "We've sourced local a lot this year, which has been a lot of fun for us," she said while mentioning Chris Pippin and John Svingen as two local musicians lending their talent and experience this year.

The camp was also held at the Evangelical Church in Glasgow which has far more space to offer participants. Campers were in three age brackets for the "Around the World" themed camp. Third to graders named their cohort "The Shooting Stars," the sixth to eighth graders named themselves the "Baguettes," while the high schoolers landed upon "The Hitchhikers" for their group.

"We had an amazing first day!" raved Wiltshire after leading the Shooting Stars through a yoga session to close out the first of eight days of lessons and exercises for the performing arts.

The camp concludes Thursday, Aug. 13, with a showcase at 7 p.m. to be held at the Evangelical Church. However, this year's free showcase will limit attendance. A filmed version of the showcase will be available upon request by contacting Jennifer Fewer at the Fort Peck Fine Arts Council, 406-228-9216.

Holding the camp at the Evangelical Church in Glasgow also allowed FPST members to continue their work on the stage floor at the theatre. The project was originally scheduled to take place after the 51st season had concluded. When the theatre and the Fort Peck Fine Arts Council made the difficult decision to forego this year's season over health and safety concerns, members of the theatre took some time to break down the stage set for "The Sunshine Boys." According to Jay Roberts, they took a day or two to reflect and assess the summer, and by the end of that week they were moving full steam ahead on tearing down the existing stage.

"We're making the most of a bad situation," Roberts explained. He and a handful of other crew members, including Sidney Hayward of Glasgow, have been working diligently - tearing out the old stage and cleaning up decades of accumulated dirt and grime that had gathered. 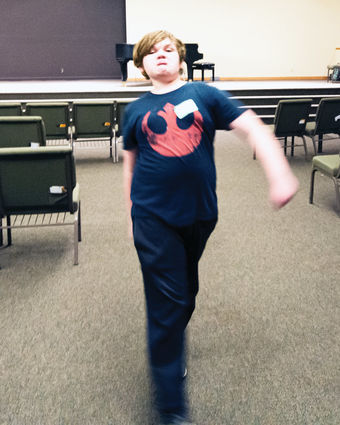 Gabriel Proctor "leads with his belly button" in a class on character development at the Fort Peck Summer Theatre's Performing Arts Camp held at the Evangelical Church in Glasgow on Aug. 4.

"You should have seen this floor before they started!" exclaimed FPST Artistic Director Andy Meyers. "You should really talk to Jay about this. He knows so much of the history." With the stage floor removed, Roberts pointed out some of the historic parts of the building. The area had been stripped down to the original stage and the orchestra pit cover removed. A door leading to a staging area below the stage was exposed and opened for the first time in decades. Roberts and crew were busy drawing up plans for how best to use the newly uncovered space.

"A lot has been done on this side," Roberts explained, gesturing to the front of the theatre and the seating area, "but this area, the stage area, has been somewhat neglected." Theatre-goers will have much to look forward to next season when the theatre returns. From the stage to a new crop of young actors from the performing arts camp, the FPST continues to contribute to a vibrant arts community in Valley County.