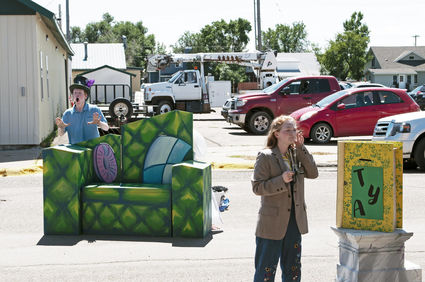 Ian Wright (l) acts as the town mayor and Bridget Wright (r) is the reporter during a reimagined tale of Humpty Dumpty during Fort Peck Summer Theatre's production of Fractured Fairy Tales at the Glasgow City-County Library on July 21.

"The shows went really well!," exclaimed I. Wright. "The crowd was smaller in Scobey but being able to perform in the theatre was a blast!"

FPST Artistic Director Andy Meyers, who wrote and arranged the production, originally wrote the show for three cast members, however the Wright siblings stepped in when the original cast members had to return home. "It was just a great opportunity to still make this play work since we are local," stated I. Wright.

Each production was 40 minutes in length and included a reimagined tale of Jack Jumping Over The Candle Stick, Little Miss Muffet, The Old Lady Who Swallowed A Fly, Humpty Dumpty, How The Camel Got His Hump, based on "Just So Stories" by Rudyard Kipling as well as a skit about brussel sprouts and treats ending with a tongue twister skit that appealed to audience members of all ages. Each production was directed by Performing Arts Camp Director Megan Wiltshire.

These series of shows weren't the first time the Wright siblings have shared the stage. They have performed together during their elementary, middle school years and even while they were both in high school. They admit even though they haven't performed together in a while, they were invested in making the show happen and lived up to the responsibility of putting on a performance the audience will remember. "We get along really well," explained B. Wright. "It was pretty cool to work together again," piggybacked I. Wright.

Reflecting upon their shows, I. Wright admits his most memorable experience was the performance at Fort Peck. "We did the performance outside. When we got near the end during the tongue twisters, we had to shout them out. We were so out of breath running in and out of the scenes while also saying our lines. It was such a clever way to do the performance."

B. Wright reflected upon her favorite moment stating, "We had a way of making people laugh without having to go out of our way to do so. Whether it was just from popping out of the couch or saying a line, we had people's attention and all we had to do was be ourselves on the stage."

The Wright siblings will next be a part of Fort Peck Summer Theatre's Performing Arts camp with I. Wright as a participant and B. Wright as a counselor. "I don't know what performance will look like in the future," stated I. Wright, however he hopes to perform in one way or another his senior year at Glasgow High School and have a chance to defend his state title for the Speech and Debate team. 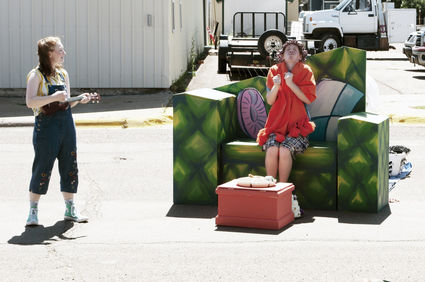