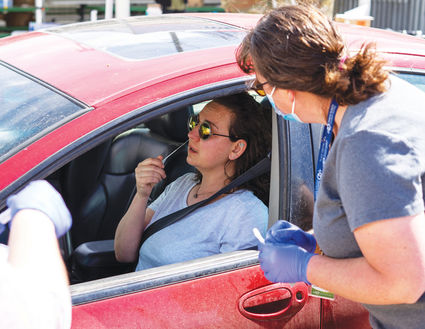 The Courier's Gwendolyne Honrud swabs her nose with guidance from FMDH nurse Brandi Knierim on June 25. FMDH tested 256 individuals during the event which occurred before the couny health department released information confirming two positive cases inside the county on June 28.

People lined up an hour early June 25, to be the first in line to be tested for coronavirus during the county's first surveillance testing event at the county fairgrounds. In total, Frances Mahon Deaconess Hospital tested 256 individuals for the disease over a five-hour period in a statewide effort to detect the virus in asymptomatic people.

Assisting FMDH was the Montana National Guard, who supplied 14 soldiers and airmen to help control traffic, distribute information and collect and transport the samples to the state lab at the end of the day. The detachment, led by 1st Lieutenant Jacob Henry, had on June 25 facilitated five testing events across the state, doing their part to contribute to the more than 13,000 surveillance tests conducted statewide.

"It's been great to have the National Guard here," said FMDH Public Information Officer Kyla Burns. She added, "They've been very organized." That organization helped the event to usher the more than 250 people through two separate testing lanes with eight FMDH volunteers conducting testing. All types of people from across Valley County showed up to be tested; some even rode through on bicycles.

The bicycle was not the strangest vehicle of choice for an individual looking to be tested. According to Lt. Henry, that honor belongs to a man in Lewistown who cruised through testing on a hoverboard. Nonetheless, the turnout on any vehicle was a comforting sight for health care workers hoping the testing will help detect any infection in the region beyond the already known cases.

For county resident Bruce Peterson, coming in to get tested was a matter of helping the state and health care workers collect the data they need to respond to the virus. "We need data. [I'm an] old science guy you know," he said, before adding, "so, we'll see."

FMDH's Chief of Planning Nick Dirkes described the event as a cooperative effort between the state, FMDH and the health department. The resources were provided by the state, but the testing was conducted by the hospital. Dirkes said they were hoping to complete 500 total tests-a goal they fell short of-but he added that "as many as we do will be a success."

Dirkes said the hospital was planning to do the testing throughout the summer, and he encouraged people to come out and be tested.

Lt. Henry described the Guard's role in the testing as a "support" role to help amid the coronavirus emergency. The crew he leads is a group of volunteers from both the Army National Guard and Air National Guard. Testifying to the broad mission of the Guard, Henry pointed out that there was no specific occupational specialty for the mission, and they had collected all types from all over the state to support the mission.

"[The state] asked for overall volunteers for who wants to come work and help support the COVID testing throughout the state. So, we all kind of come from mixed backgrounds. We've got airmen, medical, airmen that work with the 120th [Squadron] mechanics, armor officers, infantry and nurses. Everyone from all over the place," said Henry, an armor officer with the mechanized infantry in Missoula and an engineer by trade.

Henry compared the Guard's role in the pandemic as a fitting one for the state's emergency reaction force and one he said they were glad to be supporting. He said the National Guard responds to anything in order to support the communities and the state in times of need.

"It's a great mission for us, because we are local in the state," said Henry. "We know a lot of the areas and we bring a lot of [...] expertise from a variety of different backgrounds to help support local officials."

Test results are expected to be returned to participants 10 to 14 days after the event, but those that test positive will receive a call as soon as the positive test is confirmed, according to Nick Dirkes. If a case is detected, contact tracing procedures will try to identify further possible cases for testing.