Thunder Recruit Their Own To Coach 2020 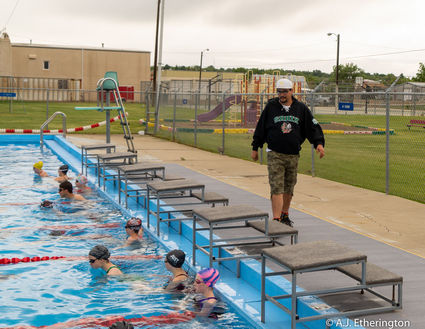 Glasgow native Ethan Shrader has returned to the Bonnie City for the summer to take on the head coach role for the Glasgow Kiwanis Swim Team. Shrader, who currently teaches English at Butte Central High School, said he took the job after Michelle Huntsman asked him to apply to the open position.

Shrader has been a competitive swimmer since he was six years old and first showed up for the GKST Thunder some 22 years ago. He has raced or coached in some way ever since and even went on to swim Division 1 at the University of North Dakota for three years. During his collegiate career, Shrader placed nationally in both the 500 and the Mile, despite-as he puts it-a resistance to being a distance swimmer.

In high school, Shrader swam the 25-backstroke, the 25-freestyle, the 50-freestyle and the 100-individual medley, which includes the backstroke, freestyle, butterfly and breaststroke. Shrader's favorite was the backstroke but he admits he was a better distance freestyler as he got older.

Shrader said he resisted distance swimming but realized he was bound to keep going in the sport after proving to be a top tier athlete in distance swimming. He explained, "I was 14 in Washington and we were at the senior sectionals meet and I had just gotten 14th in the mile. And my coach sat there and told me I was a distance swimmer, and I started crying. But that's when I decided that yeah I think I could do this as long as I wanted to."

Shrader went on to compete at UND in distance swimming placing 14th at Nationals in both the 500 and the mile. After division 1, Shrader says he "fell in love with coaching and has been doing it ever since in Butte." He is excited about the upcoming season and he hopes it will be a positive learning experience for the swimmers as they compete this summer.

"What I'm hoping," he said, "is this season turns into a season of a lot of hard work and, through that, the children can learn good leadership skills and all the things that swimming is trying to teach you as we get better at competing."

Usually in the summers Shrader would be coaching a team he founded in Butte with the YMCA, but with the COVID pandemic, USA Swim has cancelled their season allowing him the opportunity to return to Glasgow to coach.

Shrader said that with the break in seasons, he was already hoping to get out and show a lot of new techniques in the sport to a lot of older and more established swim teams. The opportunity to do so in his hometown was an added bonus. Shrader will return to Butte to teach English in August, but is considering returning for the summer seasons next year, but has not made a decision.

"My coaching philosophy is the kids will always get into it what they put into it," explained Shrader. "So, [promoting] a lot of hard work, being able to make great leaders and great competitors throughout competition and being able to have lifelong friendships throughout the sport of swimming."

On the swimming side, Shrader said his focus is technique. As he put it, "the hardest thing about swimming is keeping good technique. If you have poor technique than it's only going to take you so far, so [the hardest thing] is fixing bad habits." He intends to focus a lot of his coaching energy on doing just that.

This season, Northeast Montana has been divided into two regions. According to swim team board member Ann Kulczyk, the areas will be the "East of the East" and the "West of the East." Due to COVID it was necessary to cut the swim meet sizes down and dividing the region accomplishes just that.

Glasgow will race in the West of the East and their first meet will be this weekend in Glasgow. Approximately 270 swimmers will converge-with family and friends-on Hoyt Park on June 20 and 21 for the season opener.