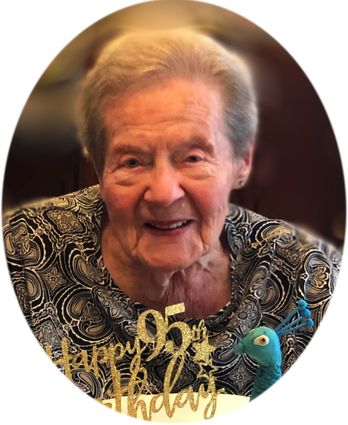 Donna Jane (Combs) Billingsley, 95, passed away on Thursday, May 14, 2020, at the Liggert Cottage on St. John's Campus in Billings, Mont., of natural causes.

Memorial services will be Saturday, May 23, at 2 p.m., at Bell Mortuary with Pastor Rick Thompson officiating. Burial will follow at the Highland Cemetery in Glasgow, Mont.

Donna was born on Nov. 8, 1924, in Glasgow, to Earl X Combs and Cynthia Isabelle Siple. Her mother passed away when she was three years old and she was raised by her dad. She attended Glasgow schools and graduated in 1942. Donna married Gale Billingsley on Nov. 2, 1945. They moved to the family ranch located west of Glasgow on Antelope Creek and raised Black Angus cattle. Donna was a ranch wife and raised two daughters, Cheri and Roxanne. As a teenager, Donald Jones joined the family and became a beloved son and brother. During her life, she also worked at Combs Drug and The Federated Store.

Gale passed away July 9, 2001. They were married for 56 years. After Gale's death, though willing, she knew she could not stay on the ranch and moved into a small house in Glasgow. In December 2008, she became a resident at Prairie Ridge. After a fall in June 2016, she was moved to St. John's Campus. She always said she was still a country girl at heart!

She was preceded in death by her parents and husband Gale.

Donna's family requests that in lieu of flowers, donations may be made to the Valley County Museum.

Bell Mortuary is assisting the family with arrangements. Condolences may be left for Donna's family at bellmortuarymontana.com.