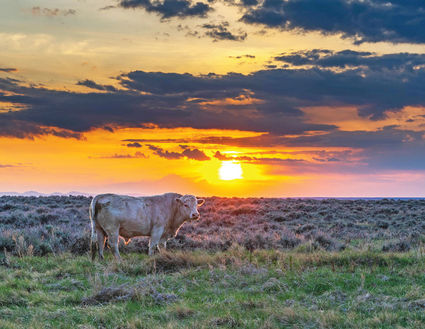 A Charolais Bull in southern Phillips County keeps a wary eye on the photographer while the sun sets in mid-May.

How now, indeed. Ranchers are feeling the effects of the closures and reduced capacity of meatpacking plants. The bottleneck occurring is forcing feedlots and ranchers to hold on to cattle at a time when they need to sell, before the cattle weigh more than the maximum allowed at a processing plant or when ranchers need to sell to feedlots. Prices for producers have nosedived in recent months, while at the same time, grocery stores and consumers are seeing a shortage in available meat and soaring prices.

Government officials have called on the USDA to ease regulations allowing for smaller processors to sell across state lines and to allow some processors to sell meat to food banks and other relief organizations. But bureaucracy takes time and red tape prevents quick action. In a time of pandemic, many people need readily available options for food.

Enter a new Montana-centric Facebook group, Shop Montana Ranch & Farm Grown Products, which Glasgow resident Tami Solberg Thomposon cofounded. "I'm not saying this will solve all the problems," she said, "but we (ranchers) can sell and make a bit of money this way."

Thompson and her friend, Mell Kincheloe, started the group on May 12 after "not much planning at all" said a laughing Thompson. The two friends were clearly onto something, seeing a rare silver lining in the pandemic cloud. By the close of business that day, the group had grown to over 900 members across the state and were approaching 1,500 within 24 hours of launching.

"There was a man in Kansas starting a group there. I think someone tagged Mell in it," Thompson explained about the group's origins. "I thought, 'This is really neat!' so I messaged her and said if she wanted to do something here, I would do it with her." The two have been friends for years, having met through Thompson's extended family.

Though the group was initially put together to connect consumers with producers and cut out a portion of the food supply chain, it immediately became much more. With meat leading in concerns, there was no surprise when producers began advertising beef, lamb, goat, and hogs for sale. But the offerings across Montana are diverse and further posts reflected that. Farm-fresh eggs, goat milk, and produce, including fruit, vegetables and herbs, were all posted for sale.

"I really see it as a digital farmers market and more," Thompson said. She explained that the group members are also seeking out recommendations. "You'll see people from out west asking if there are reliable butchers on the east side of the state," she explained as she talked about small meat processors, which are seeing a boom in business and waitlists at many are weeks to months out.

The local cofounder is quick to point out that the group is for people to connect and seek out referrals or recommendations. The admins are not and cannot police activity there. Resources for curious would-be consumers are posted, such as a link to an article from Tri-State Livestock News titled FAQ: What do I need to know about buying beef from a rancher? The articles lay out an overview of what to expect from weights to storage needs.

Kinechloe also provided an introduction to the page, which read in part "We do not want anyone to knowingly or unknowingly break the law. If you have questions regarding what's legal contact the Montana Department of Agriculture," with a direct link for group members.

The introduction was necessary as were a couple of name changes, as the initial group name, "Shop Montana Ranch & Farm" led to a few confused shoppers looking to purchase land. "We're all learning here," Thompson laughed. She further explained that there is a learning curve for many ranchers, who are used to going through the stockyards and selling to feedlots.

Thompson-who helps her father, Howie Solberg, on their, ranch near Larslan-says they are also learning their way around selling direct to consumer and how it impacts what they charge for the animal.

Regulations limit how sales are conducted. Since most producers are not approved to sell meat by the pound, they sell quarters or halves of beef, so that the consumer is buying the animal rather than the meat. The purchaser then pays for the animal to be processed into meat.

Thompson's family has in the past had cows butchered for personal use, which is common among ranchers particularly when an animal will not draw full price at an auction, such as a lame calf or one who has suffered frostbitten ears, as was the case with the steer the Thompson family enjoyed. "It was some of the best beef I've ever had!" she exclaimed.

Keeping so-called damaged cows from auction for personal consumption has similarities to the ugly food movement, which seeks to cut down on food waste by reminding consumers that oftentimes appearance does not impact flavor or nutritional value. Thompson agrees with this premise, "I'm not looking at its picture every time I cook a steak."

However, Thompson's attitude toward butchering and preparing meat locally is not shared by all. Michelle Bigelbach (self-described city girl and News Editor of The Glasgow Courier) admits to her personal hang-up, "I don't want to know the history of the animal I'm eating." She says her knowledge of ranching and farming has grown exponentially during her time in Glasgow but she would still prefer to buy her meat the traditional way-in the grocery store.

Even within the Shop Montana Ranch & Farm Grown Products members, the idea that consumers should not abandon grocery store purchases completely holds sway and is supported by ranchers. Member Maggie Nutter posted to the group supporting retail purchases in addition to shopping locally, saying in part, "Local is good and it feels good to know exactly where your food came from BUT when you buy from the grocery store you are also supporting the local rancher because grocery stores and restaurants is where most of our beef goes."

Thompson agreed with the sentiment, noting that the group is not intended to replace the current system, but rather to fill a need at this time so that producers and consumers still have options. She also highlighted the notion that knowing exactly where the product comes from and knowing the local processors can bring peace of mind for those who are concerned about overly processed and mass-produced foods.

This issue is also a deeply personal one to Thompson, who lost her mother to breast cancer. Her mother traveled to Mexico for care where doctors advised her to re-evaluate and adjust her diet to avoid processed foods which may be linked to cancer. Thompson has applied this advice to herself and her twin daughters, age nine. "They probably think I'm too strict about some of their food, but this is a real concern," she said. "I want to know what is in our food."

Given this, it should come as no surprise that Thompson supports Country Of Origin Labeling (COOL) legislation which is seeing renewed interest in light of the focus on foreign-owned meat packing plants and what constitutes "American" meat.

"Yeah, I support that," Thompson said. "I think it could really help ranchers and people who want to know they're buying local."

In recent weeks, both Senators Steve Daines and Jon Tester have promoted federal COOL legislation to support American ranchers hurt by the COVID-19 pandemic. The legislation has garnered praise from the National Farmers Union and the Montana Stockgrowers Association.

Another legislative proposal sponsored by Daines and Tester would require large meatpackers to purchase a minimum of 50 percent of cattle on the cash market. The goal is to prevent market manipulation by meatpackers and to raise overall prices for feedlots, benefiting ranchers. Thompson also sees this as a positive development for ranchers who have been facing deflated prices for their product as a result of the pandemic.

The National Cattlemen's Beef Association came out against the bill, introduced by Senator Tester and Senator Chuck Grassley (R-Iowa), which drew the ire of some producers on social media who claimed the organization was not supporting ranchers and calling for cattlemen to withdraw their membership. Marketplace help is needed for producers who are seeing cattle prices 40 percent below what they were pre-pandemic. On the other end of the supply chain, some restaurants see no choice but to raise the price they charge customers to offset their costs.

In Glasgow, Flip Burgers announced a temporary $0.35 increase for burgers after no longer being able to absorb the increased operating costs. Owners Jeff and Andi Johnson made the announcement on Facebook, expressing regret over the decision and the need for it, but concluding, "Crossing our fingers it will be a short (but not so sweet) increase and soon revert back to normal." The beloved establishment received an outpouring of support and understanding from loyal customers.

For now, the unknowns and bureaucratic hurdles will determine how the beef market continues or adjusts. Locally, Thompson hopes that regardless of that outcome, her Facebook group will continue to operate and offer Montanans the option to purchase locally.

"It's so much more than just meat. There are homegrown garden items, and homemade jams," she said. It is even a place for Montana businesses to promote their offerings she said.

A post from Yellowstone Valley Food Hub drew her attention and she is looking into how to purchase from the Billings-area business which offers mixed boxes containing Montana meats and produce from a variety of area producers. Thompson encourages everyone to check out the group, saying even if a gardener has some extra food, they can use this is a place for them.

Thompson, whose Solberg family goes back several generations in Valley County, is a huge proponent of shopping locally in all aspects. "We want to help producers and consumers. When all this happened like that," she said with a snap of her fingers, "we saw a way to help our friends and neighbors."