A Local Way to Give Back 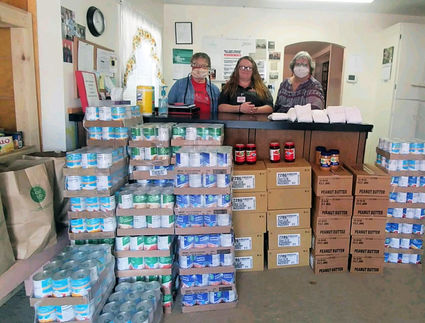 Food banks across the nation are busier than ever right now. People are really struggling and the fear of where the next meal will come from is sadly, a very real one. Reynolds Market jumped on board and donated to the Valley County Food Bank to help lessen the burden on community members. Reynolds Market assistant manager Amanda Hooper delivered $2,500 in groceries on April 30 to the local food bank. Hooper encourages others, whether it's through an organization, church, or family to donate, as every little bit helps to alleviate a little bit of stress. Thank you all, and stay community strong! Pictured left to right are Valley County Food Bank volunteer Pat Hallett, Reynolds Market assistant manager Amanda Hooper and Valley County Food Bank volunteer Mary Hughes.

CEO of First Community Bank in Glasgow Sam Waters wanted to find a way to give back to the community. As a bank in northeast Montana there were a number of opportunities for them to do just that, but Waters was looking for something different.

Waters decided to reach out to the Glasgow Stockyards, the Valley County Food Bank, purchase a bull at auction, pay Treasure Trail Meats to butcher and process it and then donate the nearly 1,000 lbs of hamburger to the local food bank.

According to FCB's marketing director Ron Trout, the entire idea and execution for the donation originated and was orchestrated by Waters and Trout says he was unaware of the donation until he read about it on social media.

"Our CEO is really a humble guy," explained Trout and, he added, the idea was more about giving back than promoting the bank. "We're just happy that as a member of the community we can make this happen and it all stays local."

Amid the coronavirus pandemic many aspects of Montana's economy are experiencing economic pressure. By making a donation to the food bank in this way, FCB not only provided the hamburger but injected money into a local ranching and meat processing business in Valley County.

"It just turned out that the rancher we bought the bull from was a customer of ours in Hinsdale," added Trout.

That rancher was Ralph Ellsworth of Hinsdale. Ellsworth joked that the bull must have looked pretty good for slaughter since it was an old bull he had kept penned up and well fed. "It probably got more fatter that way," he joked. He also added that the donation seemed to be an added bonus for him and the meat processor, making it a win-win for all involved.

The bull arrived at the Food Bank on May 5, a little over a week and a half after the auction, and the food bank could not be more pleased.

"It's absolutely awesome, just awesome, everything is awesome," exclaimed the food bank's director Pat Hallet, while discussing the donation and others like it.

She said the support from the community during the pandemic has been "unreal" and she has been overwhelmed both emotionally and physically-the shelves are stuffed full-by the generosity of people and businesses.

According to Hallet, the bank has received donations from too many people to thank but some of the key donations have come from Reynold's Market which donated $2,500 in groceries. Other donations have come in the form of monetary contributions. The Food Bank Network, which works to distribute food to banks statewide, also refunded $3,000 to the county's operation.

Reynold's spokesperson Libby Berndt said in a statement that, "Food banks across the nation are busier than ever right now. People are really struggling and the fear of where the next meal will come from is sadly, a very real one. Reynolds Market jumped on board and donated to the Valley Community Food Bank to help lessen the burden on community members."

Hallet further explained that cash donations were also up as regular donors, who would usually make a $20 or $25 donation, were, in some cases, now contributing $200 to $250.

"We have never seen this much money come into the food bank," she said. She added that the only problem now was finding a place with enough food to spend the cash infusions. "The only problem is they can't get the food in the stores," she told the Courier.

The other major contribution to the food bank that has really impressed Hallet is the volunteers that have come out to help around the shop. Hallet said the, "the volunteers have come out of the woodwork," to lend a helping hand and give back. These volunteers have helped Hallet accomplish the food bank's mission while also allowing her to stay safe in these uncertain times, even lending some muscle to the operation. "It really helps me," said Hallet with a laugh, "I can't lift any of this stuff."

She noted that overflowing shelves and the abundance of food means anyone looking to use the food bank's services should contact her to receive food, even if they think they do not qualify or have been told in the past they would not qualify, Hallet said much has changed in the past month.

"People, if they need food, we have food," stressed Hallet. "Come and get some food."

The Valley County Food Bank will be open for its regular monthly distribution May 19, at 1020 1st Ave. North. Distribution will occur from 12 p.m. to 4p.m. If you need food, regardless of eligibility, before May 19, please contact Pat Hallett, 263-3353.