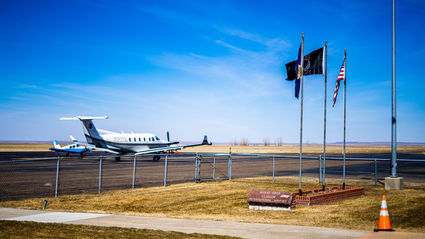 A Stat-Air Ambulance is taxiing to take off on April 10, 2020 at Wokal Field in Valley County.

Valley County's Wokal Field is one of 71 airports in Montana that will be receiving federal funding under the Coronavirus Aid, Relief, and Economic Security (CARES) Act Airport Grant program, according to press releases from the U.S. Department of Transportation and Montana Senators Steve Daines and Jon Tester. The CARES Act is part of the federal government's response to address the economic impacts caused by the global pandemic.

Senators Daines and Tester announced that $73.8 million will be distributed to airports across Montana to help cover operational costs and development projects during the ongoing COVID-19 crisis. While the larger airports across the state, such as Billings Logan International Airport and Yellowstone Airport in West Yellowstone, will receive the largest funding amounts, smaller Montana airports will also receive federal bailout money, with $20,000-$30,000 appearing the most frequently on the overall list. The Glasgow/Valley County airport is slated to receive $30,000.

With stay-at-home orders in place in most states across the nation, airlines and airports have taken severe hits to their bottom lines. Airlines are seeking federal bailout money to keep the industry afloat while airports, separate from the airlines, have also suffered as personal travel has also been impacted, including the flying of private planes. According to Wokal Field airport manager Lucas Locke, some estimates are putting overall air traffic across the country down by 50 percent. "We have seen a reduction in traffic," he said.

Cape Air, under the Essential Air Service program, is still running their scheduled two flights per day between Glasgow and Billings. Locke said the airline usually runs at around 60 percent capacity, but his rough estimates at this time without data from Cape Air, put the airline at one to two passengers per flight. He also told the Courier that STAT Air flights have also decreased with the shelter-in-place order in Montana, resulting in a decrease of fuel sales.

According to a press release from Tester's office, Montana airports have seen an 80 percent drop in passengers since the pandemic forced shelter-in-place orders across the country. "Montanans rely on our small regional airports to connect our state to the rest of the country, and the COVID-19 pandemic has shut them down almost entirely," Tester said in the release.

At this time, Locke said, "We're doing good, budget-wise." There has not been any reduction in hours among the three full-time and two part-time employees at the airport. The FAA has specified that the agency wants the CARES funding to go towards costs that are not traditionally allowed under FAA guidelines. Locke told the Courier that Wokal Field is currently looking at some equipment options to spend the funds on.

In addition, the airport has some projects in the works for this year, including replacing some of the approach lights on runway 8/26 and pavement design on both runways. This project will receive 100 percent FAA funding with no matching funds required from Valley County.