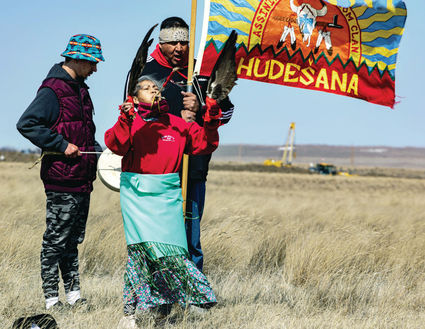 Lance Fourstar (rear right) sings during a ceremony on the Canadian border with Phillips County to protest the Keystone XL pipeline construction. Accompanying Fourstar is Cheyenne Foote (front), who is dancing and playing the flute, and an unidentified young man (left) plays the drum.

Army veteran and Assiniboine-Sioux Tribe member Lance Fourstar's voice was being carried out over the prairie by a stiff westerly wind as he chanted a traditional Native American song accompanied by a drum and flute. The sounds traveled out overto...