A Lack Of Alliteration Or Resting Brain Syndrome 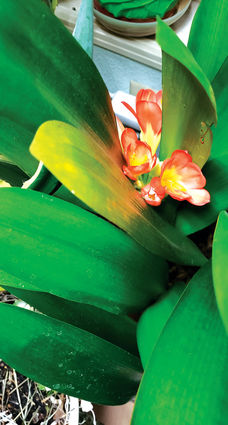 My kaffir lily is blooming inside for the first time since I've had it. Usually it waits until it's been outside for a couple of months (July). It doesn't like temps below 40°. In Missouri, my sisters' bloom in late March.

My alliteration skills are lacking this week. I have not been able to come up with a catchy headline for my drivel this week. I think my brain wants to remain in pajamas this morning. I suspect there might be just a few of us that way as we enter into the fourth week of "sheltering in place," or "social isolation," or "lockdown," or whatever your preferred term may be. So far, whatever we call it, it seems to be working for our county, so please continue!

My seeds have mostly arrived by now. There were a few apparently very popular varieties that have not. Those are varieties that don't require starting early, so I can just wait. When it's warm enough again, and the danger of frosts has passed, then I'll worry about those. I'm pretty sure I'll be able to get replacements locally once we can hit the stores again.

That leads up to my report of getting some seeds started. I went about things backwards. I moved the geraniums out from under the table with the grow light, where I paint rocks. That lead to vacuuming that area, and sweeping and mopping the rest of the kitchen. (Sometimes I get domestic.) Then the coir bricks arrived that afternoon, and so planting began.

Coir bricks expand tremendously with the addition of water, so a large plastic tub was brought in from the garage. Coir is the preferred medium for amaryllis bulbs, thus repotting those came first. Several bulbs had birthed side bulbs. The mother-of-1,000-babies (hereafter called mother, which is pretty accurate if you're thinking of the expletive) were separated and six of the medium size ones were repotted. I now have 11 pots of the original amaryllis, plus five babies. Can you tell I really like amaryllis? Once I know those mothers will survive, they'll be available. While repotting the mothers, I collected most of the babies from the edges of the leaves into a baggie with a bit of water. And I still have three very leggy mothers to repot.

After that I got busy planting the garden seeds that need some weeks of growth before going into the ground outside. I found some older tomato seeds, so threw them into some soil. If they don't grow, I'm not out much. I was going to make newspaper starter pots, but while getting the tub from the garage I came upon my stash of plastic starter pots from purchased bedding plants last year. I used those instead. I'm trying some new varieties this year: pepeta pumpkins, black eggplants, okra, gherkins, honey melons, and stevia. So far only the okra has visibly sprouted. The kitchen was a mess for two days, but it's been cleaned up and re-vacuumed.

Pork fried rice was finally made, and I'll be happy to enjoy some of the leftovers today. It's important to plan ahead for this, as cold rice is preferred. If you use rice you've just cooked, that isn't chilled, it's going to be gummy and lumpy. This cooking goes fast, so have your veggies already chopped before starting. In a nod to my picky husband's sensibilities, I stir-fried my finely chopped broccoli separately in a small amount of EVOO. I subbed coconut aminos for the soy sauce since I'm again in Whole Life Challenge mode. We both skipped the sriracha/chili sauce as well, and I used olive oil instead of canola. This does make a large amount. I sent some up the road to Mom. I think it could be frozen, but haven't tried that. We'll just eat it several times.

Our Easter celebration was small. Mom joined us for the bit of ham I dug out of the freezer and heated up. There were two turkey drumsticks that came out of the freezer and were cooked in the air fryer (just for me). Potato wedges were also air fried. They had a really nice crispness to the outside, and were soft inside, like the best french fries or broasted potatoes. I'd picked up fresh green beans, so those were steamed with quartered shallots. Bacon bits and a bit of butter were added. Dessert was fresh blackberries and a WLC-approved apple/pecan dish. I know I shared that recipe over a year ago. If you missed it and want to try it, either phone (we're in the book), or message me via Facebook.

This is a short ad: if you'd like the Courier to stay in business (to report on sports once we're semi back to normal), please subscribe! Or make a donation to them; they are a local business after all.