Distillery Teams Up with Pilot to Help Rural Montana 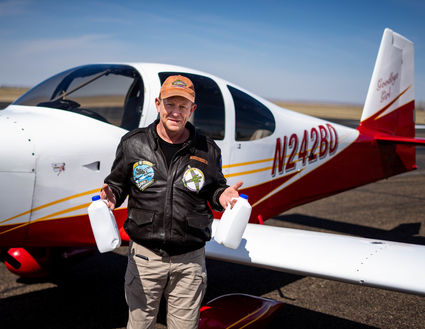 When Bryan Douglass unloaded the plastic bottles-filled with a mixture that, among other things-contained 190 proof alcohol, from his airplane on April 9, he joked about his day's activity with stat parole officer Bruce Barstad, who was there to pick up the containers for corrections officers in northeast Montana.

"I feel like I'm running moonshine," he said, handing off bags filled with jugs of hand sanitizer recently distilled at Wildrye Distilling in Bozeman.

The delivery was one of many for Douglass who had traveled from Missoula to Bozeman to pick up his load and then took off for Eastern Montana making deliveries to Miles City, Glendive, Sidney, Glasgow, Harlem and Cut Bank before returning to Missoula. He was projected, when he spoke to the Courier at 1 p.m. on Thursday, to complete the trip in about six hours.

"Yeah, she's a fast plane," he said proudly, talking about the RV10 kit plane he had put together himself and dubbed the Goodbye Girl.

The deliveries went to all sorts of requestors including law enforcement, corrections officers, a hospital in Cut Bank and a mental health clinic, among others.

For Douglass, it was a call to action. He says he had heard about the Montana Highway Patrol driving an order of sanitizer to Glendive that was destined for the hospital there. He said he was struck by the idea that deliveries may not be the best use of MHP's time and decided he would put his pilot's license and airplane to good use. He proceeded to get in touch with Wildrye to volunteer his services.

Douglass has been a pilot for over 12 years. He was recently a part of a mission to fly the D30 bomber, "Miss America"-which served in WWII and as a smoke-jumper aircraft in Western Montana-to Europe for the commemoration ceremony of D-Day.

He says that flight to Europe was about honoring those who had served-whether they were military, first responder, law enforcement and even health care workers. A tribute he said was fitting for the current situation.

"So, I thought all that tribute we did would ring a little hollow if we had an opportunity like this and didn't do anything to help," said Douglass. So, he fired up his airplane and got to work, ditching his day job as an engineer working in environmental cleanup, and flying current necessities to rural Montana. He said he's trying to convince some pilot associations and others to get involved and help fly similar missions across the Big Sky.

"I'm about sure there will be other people [with aircraft] that will want to do it." He added that airports are government funded, available to use for free and are deemed critical infrastructure so he plans to use them, since they're open, to help out during the pandemic.

When the Courier spoke to Troy Downing, part-owner of Wildrye Distilling, he joked he was trying to fend off a staff walkout at his Bozeman location. It was only a few hours before then he had told their story on Fox News. Ever since, the orders had flooded in with people from all over looking to acquire their own Wildrye hand sanitizer.

"Yeah, we're a micro-distillery, so there's no professional call center here or anything like that so there's been some growing pains," joked Downing.

Downing explained that one of his three business partners, Dr. Phil Sullivan, a chemist by trade, said the formula from the World Health Organization would be simple to make. So, they started off making personal-size bottles and handing them out to the local community. Before long they were getting requests for larger orders, like one from Gallatin County who wanted to put the bottles in patrol cars since they were struggling to source them normally.

Eventually, businesses like Yellowstone Bank had started "picking up the tab" for orders for the Gallatin School District and the county disaster recovery team. Downing said it has been great to see so many community businesses and people chip in to help with the effort in different ways. The local Walmart offered empty plastic containers to package the sanitizer. Others, like Murdoch's in Bozeman, supplied multi-thousand-gallon storage tanks to store the product for bulk orders at their warehouse.

"I don't even know where to start," said Downing, "we've just had so many people come out and just want to be apart of this. It really warms your heart."

The day we spoke, the distillery was looking to fill orders with Disaster and Emergency Services after talking with the state Adjutant General Major General Quinn with the Montana National Guard. Downing was also set to sell 10 gallons to Attorney General Tim Fox that afternoon, who was purchasing the sanitizer to distribute to Lewis and Clark County Sheriff Deputies.

Downing also told a story about one order from a portable toilet company that ordered two 50-gallon drums. He said the company needed hand sanitizer to supply porta potties at construction sites. He explained that the law requires sanitizer in the portable restrooms or the construction sites would be forced to shut down. The company, according to Downing, services about 800 construction crews, making the order an essential task for Montana's economy.

Anyone looking to pick up a bottle for consumption will be disappointed, under federal law in order to sell the sanitizer, the mixture must contain a denaturing ingredient to render it unpalatable. Downing said they used an approved bittering agent and one of the hardest parts in the whole operation is ensuring the denaturing substance does not get anywhere near the consumable spirits.

"By growing from the dozens to the hundreds to the thousands, our employees have been really working the bottling line and it has really let us keep our employees employed," said Downing. "I'll tell you what really warms my heart in this, is they seem to be genuinely proud that they are working for a company that's trying to do good for the community."

The hand sanitizer production has allowed them to bring on more staff and they have reached out to industries that have been hit hard by the pandemic to offer people a chance to work. Two areas Downing says they have tried to hire out of, are the bar and restaurant service industries which have laid off people as restaurants switch to take out and delivery only and bars shut their doors.

The only hiccup in the process has been packaging. In addition to Murdoch's and Walmart, Bridger Brewing has provided buckets to store and ship products while some places have been purchasing entire drums of hand sanitizer cutting down on small package needs. The issue of sourcing and acquiring personal-size packaging, or more plainly small plastic bottles, has been challenging. Downing said his wife, Heather, has been searching the internet to find those bottles.

The distillery has four main owners. In addition to Downing and Sullivan, Ben Ganzer and Sten Anderson are major owners and operators in the company. Downing pointed out that there were several investors as well aside from the key four.

Asked if he thinks the company will continue the hand sanitizer production after the pandemic, Downing said it was not the company's core business nor did he intend to make it so. "We're going to do this as long as there's a need and as long as we're helping. But, really, what our core business is, is, you know, we take perfectly good sweet corn out of Corvallis and perfectly good malted barley out of Great Falls and we turn it into bourbon."