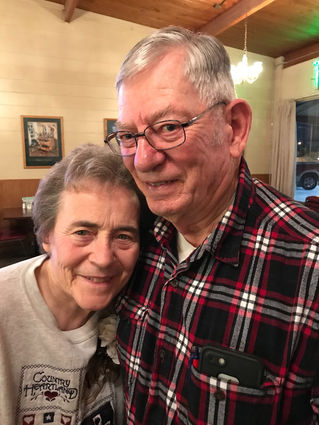 A Celebration of Life service will be held at a later date due to current health mandates.

Joan was born Feb. 18, 1940, to Claude and Muriel (Evans) McKean in Minneapolis, Minn. She and her brother were raised alongside many foster children in their home, which gave her a lifelong love for children.

Joan accepted Jesus as a child, which influenced the course of her life. She graduated from North High School in Minneapolis in 1958, attended St. Paul Bible College (Crown College) in St. Paul, Minn., where she met Ross Trimble, then went to Miller Hospital and earned her LPN in April 1961. She worked in Pediatrics at North Memorial Hospital (Burn Center) in Minneapolis, until her marriage to Ross on Sept. 22, 1961. Ross and Joan lived briefly in Glasgow, Mont., before moving to the family farm north of Wolf Point, Mont. They were blessed with four children, Lynette, Stephen, David and Robert.

Joan loved teaching Sunday School for the youngest children at the Bethel Mennonite Church north of Wolf Point. She kept active supporting her kids in their many activities, as well as making hundreds of ear tags for the calves born and raised on the farm/ranch. She loved to bake, and always had fresh cookies available. She discovered a love for painting later in life and created many beautiful works of art, but when her MS was diagnosed, she became the lady who loved to seasonally decorate her walking aids (walker/wheelchair).

Joan was preceded in death by her parents, Claude and Muriel McKean; and one brother, Robert McKean.

Visitation was held at the Clayton-Stevenson Memorial Chapel in Wolf Point on Monday, March 30, from 1 to 5 p.m.

A "private" graveside service was held on Tuesday, March 31, at 11 a.m. at the Bethel Mennonite Cemetery north of Wolf Point.

"I have fought a good fight, I have finished my course, I have kept the faith: Henceforth there is laid up for me a crown of righteousness, which the Lord, the righteous judge, shall give me at that day: and not to me only, but unto all them also that love his appearing." 2 Timothy 4:7-8 (KJV)

Memorials can be made to: Lustre Christian High School / Schmeckfest, KGLE Radio, the Gideons, the MS Society or the charity of your choice.