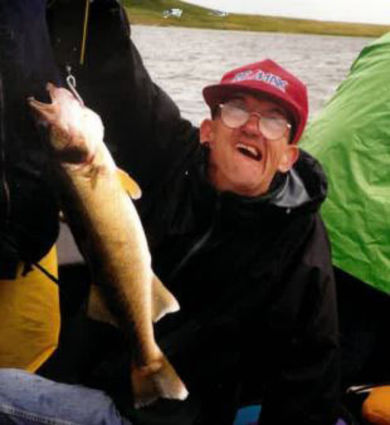 Thomas "Tommy" Edward Oderman passed away at the age of 76 on Wednesday, March 4, 2020. He passed away peacefully at Missouri River Manor in Great Falls, Mont., where he had resided for the past 14 years.

A graveside service will be held at a later date, yet to be determined, in Glasgow, Mont.

Tommy was born on April 7, 1943, in Great Falls, but grew up in Glasgow, which he always considered his home. Although he was born with severe cerebral palsy, he had a wonderful personality and a love for people. His disabilities did not prevent him from making nor having an exciting life.

Tommy's schooling included The Opportunity Room in Glasgow, a school for Cerebral Palsy Children in Billings, and The School for the Deaf and Blind in Great Falls, where he learned sign language, which helped him a great deal in communicating. He started his work life at a sheltered workshop in Butte, one of the first of its kind in Montana. He soon transferred to the community programs for people with developmental disabilities in Malta, Mont., one of the first communities in northeast Montana to provide coordinated services for the handicapped. In 1986, he moved to Great Falls, where he worked with a janitorial crew with Easter Seals Sheltered Workshop. Under the umbrella of Quality Life Services, Tommy was able to enjoy semi-independent living in an apartment of his own for 20 years.

He loved working, listening to music and dancing, and his favorite activity was fishing. Through the years, he was able to travel with his sister, Linda, and her husband, Jerry, in their motorhome for several weeks each summer. They went camping, sightseeing, and had many trips to Canada with Jerry's large family, who loved Tommy as their own. He flew to Arizona to spend holidays with family each year. He spent one vacation in Cabo San Lucas, Mexico, where he went deep sea fishing and caught a large marlin. His fish stories got bigger and bigger after that.

Tommy was blessed with a strong Christian faith that kept his heart happy and certain of Heaven throughout his life. He was a member of Our Savior's Lutheran Church, where he attended during his working years.

He was preceded in death by his parents, George and Palladia Oderman; one brother, John Oderman; and two sisters, Diane Marie Oderman and Carole Hopwood.

Tommy is survived by one sister, Linda Hoffort, and her husband, Jerry, of Lake Havasu City, Ariz .; many nieces and nephews; his loving Canadian Hoffort family; and his family of caregivers and friends at Missouri River Manor, who were kind and good to him in those last years.

Condolences for the family may be shared online at http://www.SchniderFuneralHome.com.