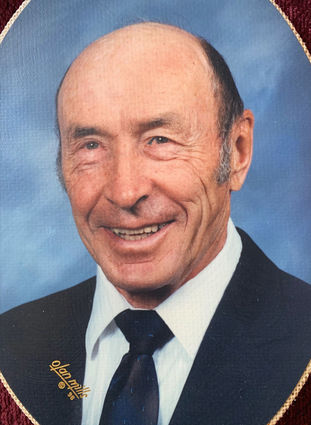 Dave was born fifth of 11 children to his parents, John and Annie Schoonen, at their homestead north of Hinsdale, Mont. Like many other families during the Great Depression, his parents eventually lost their homestead and were unable to care for all of their children. Six of the children, including Dave, were put into the Montana State Orphanage located by Twin Bridges. Dave was five years old at the time. At age 15, he returned home to live with his father and mother and reconnected with some of his siblings.

When attending high school in Hinsdale, Dave lived with a widow, Mrs. Ruth Baker, and her five children. She was a strong Christian and under her influence Dave found his faith in God. He also experienced the joy of living with a loving family. They all became life-long friends.

In later years, he organized and held two family reunions and assisted in taking care of some of his siblings as they aged. He also researched and wrote the Schoonen Family History.

Dave was a military man at heart. His active military service encompassed the U.S. Army, U.S. Air Force, U.S. Navy and the Montana National Guard. When he turned 18, he joined the Army and was stationed in Alaska during WWII. At the end of the war he enlisted in the Air Force reserve. When the Korean War started, he joined the Navy. He often told the story that one day while at sea he received a summons from the Air Force to report for duty. "Sorry," he said. "I'm out to sea on a Navy ship." He served in the Navy for four years and was stationed on three different ships: the USS Neches (Oil Tanker), the Pirate (Minesweeper) and the Bonn Homme Richard (Aircraft Carrier). He was awarded a Purple Heart for wounds received in action, when his ship the Pirate was sunk by a mine in Wonsan Harbor, North Korea.

While home on leave he met the love of his life, Helen Overcast. In 1952, after his Navy honorable discharge, he married Helen in Havre, Mont., (they were married for 67 years). For the next four years he attended Montana State University in Bozeman and graduated with honors in electrical engineering. While at Montana State he continued to serve his country by enlisting in the Montana National Guard for four years.

In 1956, Dave and Helen moved to Idaho Falls, where Dave worked at the Idaho National Laboratory site for the next 30 years in supervisory and management roles. He worked at the Materials Testing Reactor, Engineering Test Reactor, Waste Management Site and for the Spent Fuel Cask Testing Program. He enjoyed his work and many of his colleagues became close friends. When he retired in 1987, Dave and Helen were able to travel to the Netherlands to meet some of his distant relatives.

Dave and Helen were charter members in establishing St. Paul's United Methodist Church in Idaho Falls on April 8, 1960, and have been active members ever since. Being raised in a humble upbringing, he had a passion for giving to his church, local community and many service organizations. He was very dedicated to Boy Scout Troop 382 at St. Paul's. He strongly supported the Idaho Falls Youth Hockey Programs and under Wayne Lehto he was a coach and assistant coach for many years. However, one of his proudest accomplishments was to help establish the first Idaho Falls Cinco de Mayo celebration, held on Cliff Street, May 6, 1989. In 1994, he received an award for five years of dedicated service to the Cinco de Mayo Fiesta.

Dave loved the great outdoors and instilled respect and love for nature in his children He took them tent camping in almost every camp site in Idaho and taught them hunting, fishing, canoeing and whitewater rafting. Because of his love for the outdoors, Helen and Dave built a cabin along the Salmon River in 1980. This cabin stands today as a favorite gathering place for family and friends.

Dave accomplished his lifelong goal of raising a close loving family. He is survived by his wife Helen, and their five children; Lori, Carol, Jana, Amy and David; and many grandchildren and great-grandchildren. All his children married and their spouses became close friends and competitive pinochle and cribbage players.

Dave is preceded in death by his parents and all of his siblings and their spouses.

GOD, FAMILY, FRIENDS, COUNTRY, LOVE FOR ALL is how his headstone reads. He strongly believed in these values.