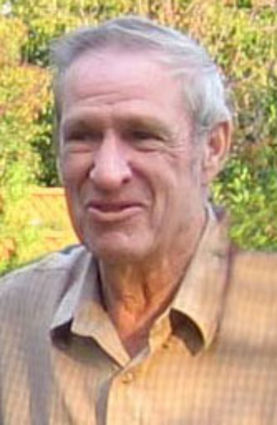 George Emery Watson was born in Glasgow, Mont., on Feb. 22, 1939. He attended schools in Glasgow and Saco, Mont. His main interests were auto mechanics and electronics.

George loved Saco. Many of his memories were there.

In Saco, in 1953/1954, he worked on Scheeles' wheat farm north of Saco operating a combine, tractors, crawlers, etc. each summer. He was 15 or 16. He loved working for the Scheeles.

George had many adventures.

He told a story when he and a friend went into one of the grain elevators in a town near Saco. There was a man-elevator there, which involved counter-balance weights (and required some instruction about its operation). Somehow, George's friend or George goofed something up. The friend on the elevator rocketed from the bottom to the top in a matter of seconds. Upon returning, by stairs, his friend, healthy, but seeing stars and greatly disoriented, said, "Man, what a ride."

Larry Ferguson, Jimmy Cortright, George, and another boy drove a model A or T on the railroad tracks from the Great Northern near Saco to Cole (about 10 miles) and back. This track was built for the Fort Peck Dam and rarely used after that. They said that it went well. The only time they fell off the track was when someone tried to steer. George said that this particular Ford model was unique because the tires fit nicely on the rails without falling off the tracks.

George also used to entertain children with stories of how dinosaurs still roamed the hills south of Saco.

George's friend, Howard Pippin, recalls another fond memory from 1953-1954. Jim Cortright, George, and Howard wandered the streets of Saco many nights and never got into any bad trouble. "We never broke into anything or did anything worse than climb the Saco water tower."

While in high school, George ran the Saco Gem Theater movie projectors while Mr. Ball took a break elsewhere. Back then, the camera operator had to change reels several times to keep things running.

After Donoho and Watson's shop and hardware store burned in 1954, the family moved back to Glasgow, where George's dad ran an automotive shop.

George worked on the Great Northern Railway tracks during the summers in about 1957 as a gandy dancer replacing tracks east (I believe) of Glasgow.

George graduated from Glasgow High School in 1957 and went to a trade school in Portland, Ore., to learn auto mechanics. He returned to Glasgow and worked for a while at Markle's Fuel Station, where his boss was his Uncle Clifton Bruce.

One summer day in Glasgow, George and his fellow teenage worker decided it would be a good idea to clean the station grease pit with white gas (no additives). They cleaned it up nicely, sparkling clean. The two teens left the grease pit (which turned out to be a good idea). What they did not know was that the pit did not have an explosion-proof sump pump. As they stood there, the sump pump started, and a spark ignited the pit. The ensuing fire blackened the pit and everything else in the repair area. The employees cleaned up with no one hurt, and the damage was minimal. The thing that George loved to say is that his Uncle Cliff Bruce's number one priority that day was moving his new black and white 1955 Packard down the street out of harm's way.

Eventually, George's family moved to Salinas, Calif. George followed the family to Salinas and attended Hartnell College, where he graduated in 1962 with an A.A. in Electronics.

At this time, he worked for Cochran Equipment as a welder. Cochran made special equipment such as trucks with a unique wheelbase to drive down lettuce fields near Salinas.

While in Salinas, George met and married Blanche, his loving wife of 59 years. At about this time, he joined the Navy Reserve.

A Monterey County (California) Congressman recommended that he attend Naval Reserve Officer Candidate School. The Navy thought he was officer material, but George did not. George was a leader, but not of the military type. Instead, he became a Sea Bee, which is an acronym for Construction Battalion (CB). During this time, he and Blanche lived in Port Hueneme, Calif. The Navy sent George to Guam to finish out his two years.

George worked for Kodak and Hewlett Packard in their good days. He was an early recycler and handled much of Hewlett Packard's recycling program. George and a friend pretty much recycled before it became popular. He also created an electric bike to commute to work, which his coworkers said would not work, but, of course, it did.

George was probably never able to use a warranty because he improved everything mechanical or electrical that he and Blanche bought.

He was very creative. He had one of the very first flat screens (sort of) televisions in 1970. Well, it appeared that way. On the living room side of the TV, the screen was flat against the wall, but when you went into the adjoining bathroom, the long tube and electronics hung out in there (enclosed in a decorative wall-box).

After a long illness, George passed away on his birthday, Saturday, Feb. 22, 2020. He and Blanche had two sons, Glen and Greg, and a granddaughter, Skylar.

He was preceded in death by his mom and dad, Ralph Watson and Margarette Watson; and one sister, Loretta Watson Tomlinson.

Surviving George is Blanche; their two sons and granddaughter; and two brothers, Glen (Orval), of Fairhope, Ala., and Gordon, of Tomball, Texas.

George was loved by all who will remember him fondly as the character that he was.