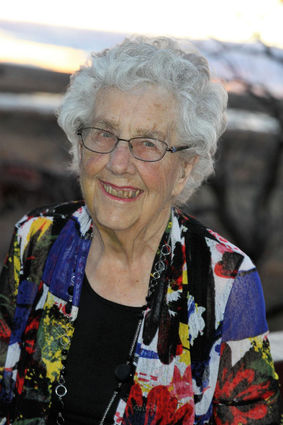 Family will receive friends from 3 to 5 p.m., Sunday, March 15, 2020, at Bell Mortuary. Memorial services will be at the First Lutheran Church at 10:30 a.m., on Monday, March 16, with Reverend Todd Wright officiating. A luncheon will follow the memorial service and inurnment will be Highland Cemetery following the luncheon.

Dee was born on April 21, 1928, in Waseca, Minn., to Emma (Johnson) and Joseph B. Lee. Dee attended the Waseca Country School until eighth-grade and then graduated from Waseca High School in 1946. Dee continued her studies at St. Olaf College in Northfield, Minn., and the University of Minnesota in Minneapolis. She would spend her college and teaching summers working at various National Parks.

In 1951, Dee was offered a fourth-grade teaching job at the South Side School in Glasgow. On her train ride to Glasgow, she met her life-long friend, DeLores (Larson) Gilchrist, who was also coming to Glasgow to become a teacher. To avoid confusion, Dolores took the nickname "Dee." The two young ladies then became roommates and shared many special memories together. One of their special memories was double dating their future husbands together.

Dee met her handsome cowboy, John Wesen, at Ken's Supper Club. Dee married John on June 19, 1954, in North Waseca Lutheran Church. The newlyweds made their home at the Micky Anderson place in 1954, shortly thereafter they moved into town to the Shuland addition of Glasgow. In 1961 they became partners in Killion's Shoes, Dee was active in the running and ownership of the business for more than 50 years. In 1964 they moved to their farm where they kept busy with their ranching and farming duties, and raising their six children. Dee was an active member of the First Lutheran Church and a 4-H leader for 25 years plus. She enjoyed tending to her flowers, cooking, baking with her grandchildren, playing cards, socializing with friends, and walking her dog, Holly. But, her greatest enjoyment was spending time with her family, especially her grandchildren and great-grandchildren.

Condolences may be left at bellmortuarymontana.com. Memorials can be left in Dee's name to the donor's choice.