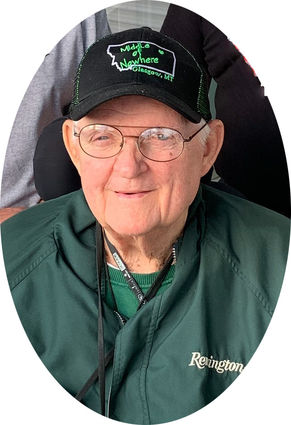 Tom was born in Saco, Mont., on Dec. 10, 1932, to Major B. and Sara B. (Kays) Hickok. He joined sisters Virginia and Sara "Barbara," and brother Norman in the family home north of Hinsdale, Mont., in the Genevieve Community. His brother Robert "Gordon" was born four years later. The family moved to a home in Hinsdale in 1938, and Tom attended first and second grades there.

For the next years of elementary school, he lived with his Aunt Mae and Uncle George Hickok in the Opheim, Mont., area and attended Bog Coulee, New Baylor and Opheim schools. He then started seventh grade in Glentana, Mont., but finished the year in Hinsdale when he went back to live with his parents in 1946. His years spent with George and Mae were filled with farm chores, fencing and herding sheep. The summer of 1946, when he was 13, he and his brother Gordon contracted polio, and Tom spent the next two years at St. Vincent's Hospital in Billings, Mont. After being confined to a bed for the first year, Tom progressed to a wheelchair and was able to complete eighth grade while in the hospital. By June of 1948, he was able to use crutches, return home and graduated from Hinsdale High School in 1952.

After high school, Tom worked on his family's farm, hauled cattle and also drove a mail route. In December of 1952, he began working as a bookkeeper at Markle's Hardware store in Glasgow and spent 25 years there. In 1978, he took another bookkeeping job at Terry Chevrolet in Glasgow and worked there until he retired in 1985.

Tom married Mary Alice (Campbell) Hickok on Dec. 10, 1954, at the Methodist Church in Glasgow. This was his 22nd birthday, as well as his parent's 35th wedding anniversary. Together, they raised five children: Sally born in 1958, Peggy in 1960, Mark in 1963, K.C. in 1966 and Kelli in 1973. They loved being parents, and also extended that love to the many children who came into their home for the daycare they provided.

The aftereffects of polio filled Tom's life with many challenges, requiring him to wear leg braces and use crutches, but it never kept him from working hard, and he complained very little. After the death of Mary Alice in 1999, he began using a power wheelchair. He sold the family home in 2005 and moved to Federal Way, Wash., where he enjoyed the temperate climate and companionship of classmates who lived in the area. One of these classmates, Carole Brown, had handicapped accessible living quarters in the lower level of her home, and Tom lived with some degree of independence, while still having assistance and friendship provided over his time there. When his health began to decline in 2016 he moved to Valley Health Care Center, Billings, and in May of 2017, he moved back to Glasgow and resided at Valley View Nursing Home.

Tom will be remembered for his strength of character, work ethic, attention to detail, punctuality (which meant being 15 minutes early), and teasing, wry sense of humor. Along with his curly hair, he passed these attributes on to his children and grandchildren and lives on in the hearts and memories of everyone who loved him.

Tom was preceded in death by his wife; parents; siblings; and one grandson, Cody Carlsen.