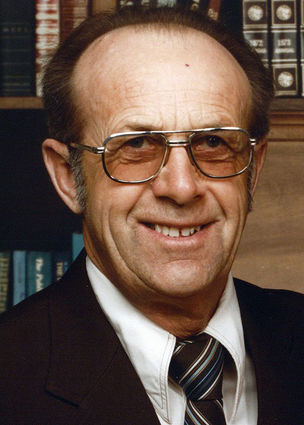 Our dear father, grandfather, and great-grandfather, Rudolph Toews, once said after a family gathering, "I am a rich man." He was not talking about money, but rather of relationships. He was always happiest when surrounded by his family, eagerly looking forward to visits from family members and hearing about family gatherings even when he was unable to be there. He died Thursday, Feb. 6, 2020, less than a week short of his 98th birthday.

He was born Feb. 15, 1922, to Abram and Helena Toews in a farmhouse about 20 miles north of Frazer, Mont. The middle child of 13, he had one brother and 11 sisters. After elementary school he attended two years at Lustre Bible School and then went to high school, first in Glasgow and then Tabor Academy in Hillsboro, Kan. When he was drafted, he spent two years in alternate service in Glacier Park.

Church activities played a large part in his life as a young person. He accepted Christ as his personal Savior, responding to an altar call during an evangelistic meeting when he was a teenager. He was baptized and joined the Lustre MB Church the following year and after that he said he always looked forward to Sundays when he could go to church. Music played a major part of his involvement in church; he was for many years the choir director of both the adults and children at Lustre MB.

He and Clara Tieszen, his neighbor and classmate at Lustre Bible School, were married Oct. 7, 1946, in the midst of a blizzard so severe that they were unable to leave for their honeymoon. They spent their wedding night in a hastily-cleaned-up attic room at the parental Tieszen home.

When asked, Dad said the happiest years of his life were the next 30 when he and Clara farmed, he drove school bus, milked cows, sold milk to the neighbors, and they raised nine children. They sent every one of the children to Lustre Christian High School and then to college or Bible school.

He also loved to write. He kept up regular correspondence with his children, two family round letters and his sisters. In 2002, as part of his retirement project, he wrote his life story as a short book: "This is My Story, This is My Song," quoting many songs that have been meaningful to him over the years.

About the time Rudy and Clara were thinking about retirement and turning over the farming operation to their youngest son, John, Clara began having symptoms of what would later be diagnosed as progressive MS and dementia. At first Rudy used travel as a way to continue family interactions. He bought a wheelchair-accessible van and made several trips to visit family, sometimes taking along two or three of his widowed sisters. Within a few years Clara became unable to travel and required full-time care, provided at first by Rudy and later by daughter Karen. During her last year of life Clara was in Valley View nursing home in Glasgow where she died in 1988.

On Nov. 25, 1988, he married Frankie Kellar, from Tacoma, Wash. They moved into the house on the Tieszen homestead, enjoying gardening, landscaping and traveling. They took several major trips, both national and international – Lima, Peru, Paris, New York, Missouri and Arkansas -- always to visit or travel with family.

They were married almost 22 years when a tragic car accident claimed the life of Frankie. Dad moved into Nemont Manor, where he lived for three years before moving into Prairie Ridge Village where he lived until his death.

Even though he was not living in Lustre, Dad maintained a lively interest in activities there. For years he attended the annual fundraiser, Schmeckfest, held every March at LCHS and was often asked to be a ticket-taker/greeter because he knew so many people. He was known to be a valuable source of history about the community.

His life can be summed up in the words of a song that was particularly meaningful in his last year:

Living by faith in Jesus above,

Trusting, confiding in His great love,

From all harm safe in His sheltering arm,

I'm living by faith and feel no alarm.

He was preceded in death by his parents; wife, Clara; second wife, Frankie; one brother; 10 sisters; and one great-grandchild.

The family requests that memorial donations be sent to the Lustre Christian High School.