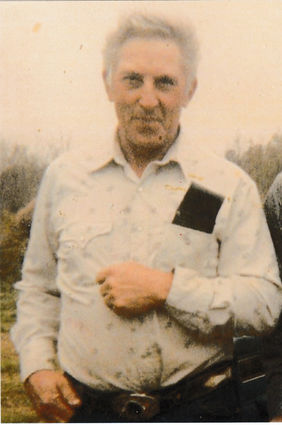 He was born in Winnett, Mont., Jan. 28, 1927. His parents were Victor Sandstrom and Martha Ellen (Henneman) Sandstrom. Shortly after his birth, they moved to the Missouri Breaks near Little Crooked and Wilder to his Uncle Fred Sandstrom's homestead. He was the first born, later joined by his sister Lois (Sandstrom) Bricker, brother Freddie Sandstrom and sister Delores (Sandstrom) Rife. Dale attended school at Little Crooked School and talked about riding horseback and sometimes walking to school as a young man. He had many stories to tell about his young days in the breaks and his stories usually ended in laughter about those situations. The Sandstroms, including Dale's grandparents, Olaf and Johanna Sandstrom, who had immigrated from Sweden. and many uncles and aunts all left the area in the 1930s. Victor and Martha Ellen's marriage had ended at that time.

Dale moved to Vancouver, Wash., with his father, where they were closer to other family. In 1943, Dale moved back to the Roy, Mont., area and lived with his uncle, Ray Henneman. He worked many ranch jobs and enjoyed getting to know the people in the area and was known for his ability to break horses and ride.

Dale was employed with the Fish and Wildlife Service out of Lewistown while living in Roy and in 1957 was transferred to Fort Peck, Mont. One memorable trip he and Bonnie took while living in Fort Peck was a week-long horseback trip along the Missouri River to Roy. With two saddle horses and one pack horse. Home movies they captured shared the scenery and wildlife they saw along the way. After working for the Fish and Wildlife Service for several years, he left and bought the local Gas/Service Station in Fort Peck. After a time, he sold the gas station and worked east of Fort Peck for rancher Lyle Nelson. Dale was working there when he and Bonnie moved their family to Edwards in 1974.

They started a sawmill and sold lumber for many years, including sawing logs for neighbors and helping them build log homes. Dale loved horses and seemed to always have a herd of them. He often had a team and would use them to haul logs to his saw mill. Dale taught horsemanship skills to his children and grandchildren. He and Bonnie enjoyed accompanying their children and neighbors on local trail rides.

After years of hard work, Dale retired and he and Bonnie remained near Edwards where they were near three of their sons. Dale enjoyed visiting with family and friends and, especially, about his days in the Missouri Breaks. He was a true cowboy. He had a sense of humor and his gentle laugh was easily shared. Dale was blessed with 23 grandchildren and 29 great-grandchildren.

He is survived by his wife Bonnie; their children; grandchildren; great-grandchildren; one brother-in-law, Jim (Janet) Rifle; one sister-in-law Claudia (Hume) McMartin; and many beloved nieces and nephews.