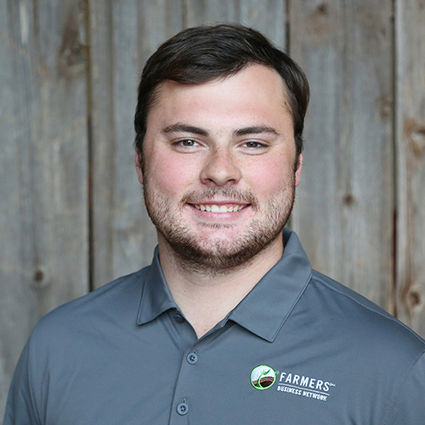 Over the past few months, Nashua resident John Walker has been keeping busy being an advocate for farmers and ranchers of all ages. In September he was elected President of the Valley County Farm Bureau and in November was elected to be a part of the Young Farmer and Rancher (YF&R) Committee for the Montana Farm Bureau. Both roles allow him to not only recruit new members into making changes for the community of agriculture, but also provide a voice at the county, state and federal levels. "I have appreciated getting to know farmers and ranchers and what they want to see change. They are all busy people, so if I can speak to legislators and go to events when they can't make it, I want to be able to," explained Walker for his motivation for being involved.

In addition to his new roles, he currently works at Farmers Business Network, helping farmers improve their profitability. Walker grew up in Livingston around his family's ranching operation and throughout school became a part of agriculture organizations, including holding the position of FFA State Officer. "I was involved with the Farm Bureau while in college at Montana State University and just got hooked. I left the state for a year and then moved here," said Walker. Though he doesn't currently own land, he does have goals to own a small ranch down the line.

He has been a part of the Valley County Farm Bureau for two years and his main focus during this year's tenure is to get more people involved, in addition to running meetings, correspondences and lead with direction. He was nominated for the President position and then was elected by the board. "Former President Dean Reddig has encouraged and pushed me. It's great that I have a strong board behind me. There is a lot of support and guidance," said Walker. His main focus this year is to get more people involved in the county Farm Bureau, which brings about policy changes to farmers and ranchers in the area, not only in the agricultural sector but also brings about other policies that are important to them such as healthcare and rural internet. "The Farm Bureau is the largest organization that brings about these changes. We just celebrated our centennial year this past year," explained Walker. In addition to policy changes, Valley County Farm Bureau also provides two scholarships to students pursuing a rural occupation or agriculture occupation, with recent recipients including Michah Tweten and Garrett Lloyd. "The County level tries to be very local and value what is wanted in the community," said Walker.

In addition to serving the county, the Valley County Farm Bureau also advocates for farmers and ranchers at the state and federal level. "All county Farm Bureaus come together to determine what to focus on, then it's voted on what to move forward to make more solid and less ambiguous," explained Walker. "This year we are also focusing on about protecting ranch lands against folks who want to use the land for other purposes, such as APR. At the federal level it's about trade issues, which weighs on everyone's minds. But we want to focus on how to bring about new innovations that will work for us."

In addition to being an advocate for farmers and ranchers in the Farm Bureau, Walker's other post includes being a member of the Montana Farm Bureau Federation Young Farmer & Rancher Committee for District 7. Walker was nominated for this post by those who represent the District, which includes Roosevelt, Phillips and Valley counties. "I knew there was an opening as they needed to fill a spot. I will be serving for one year as a result of the circumstance of filling the spot. Normally, the position is a two-year position. I know lots of folks on the committee who have been involved previously in agriculture, and it's such a great support system," stated Walker. Walker serves with Opheim graduate Gwynn Simeniuk on the committee, in addition to members from other Districts, whose main purpose is to bring education and opportunities for young farmers and ranchers. The group meets two to three times a year to discuss issues that are central to this demographic throughout the state while also hosting the Hoofin' It For Hunger event in Miles City, which benefits the Montana Food Bank Network. The committee also attends and helps put on the National Conference, which will be held March 13 through 16 in Louisville, Ky. "This conference allows people to be with like-minded individuals where they will attend workshops, events and listen to speakers. It truly caters to the younger crowd," said Walker.

Walker's inspiration to be involved in the agricultural sector is simple: help and keep the sector going for future generations. "When I was in college, my economics professor stated 'Ag is mostly a free market system.' I don't see that, and I want to give them [farmers and ranchers] the best hand to help keep the legacy going," said Walker. "Farmers and ranchers are seeing more challenges. They are seeing increases in mental health, changes in technology. Being a young person myself, I can help with those changes and make sure people have help with those aspects.

For those interested in joining the Montana Farm Bureau, go to mfbf.org or contact members that are currently in the Farm Bureau. "It's a great way to bring about issues and send them through the right channels on where they need to go," said Walker.