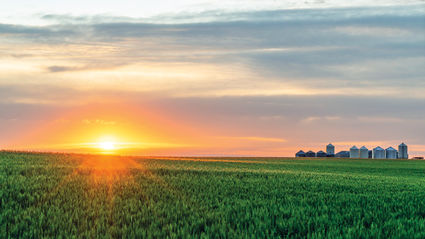 The sun sets over a field of wheat in central Valley County during the summer of 2019.

The United States Mexico Canada Agreement (USMCA) took a major step forward to implementation on Dec. 10 when the House of Representatives announced it had reached a deal with the Trump administration. The agreement will now be sent to the Senate for a vote after the vote occurs in the House.

The trade agreement, touted by the administration as a replacement to the North American Free Trade Agreement (NAFTA), has lingered in the House since an initial agreement was reached in September of 2018. Though all three countries are anxious to move ahead with the deal, Senate Majority Leader Mitch McConnell has said the agreement will not come before the Senate this year.

The agreement between House Democrats and the Trump administration comes as the House is preparing to vote on articles of impeachment, and as the Senate prepares for the probable impeachment trial in January. McConnell has said he does not expect his chamber to take up USMCA until after the trial in the Senate.

The U.S. Secretary of Agriculture Sonny Perdue issued a press release Dec. 10, celebrating the announcement of an agreement between U.S. Trade Representative Robert Lighthizer and Speaker of the House Nancy Pelosi. "USMCA is a big win for American workers and the economy, especially for our farmers and rancher. The agreement improves virtually every component of the old NAFTA, and the agriculture industry stands to gain significantly," he said.

While the USMCA does include more rules regarding intellectual property and data, the digital economy and labor and environmental protections which reflect the growth in those areas since the original NAFTA was enacted in 1994, there remains questions as to how much benefit farmers and ranchers will see from this agreement.

Farm Journal Washington correspondent Jim Weisenmeyer said in that publication he expects ratification early next year despite the surrounding politics at play, however he did not note significant improvements for the agriculture industry. "Overall, there's not much major news out of this for agriculture except this solidifies the North American market we have," he said.

The Farm Journal underscored that point, quoting American Farm Bureau economist Veronic Nigh on the deal's importance to producers, "It's because it sets a precedent moving forward, that other countries know the U.S. is open for business, and that we can certainly be relied on to pass trade agreements that we signed."

Analysts say meat and dairy farmers benefit the most under USMCA, though the Washington Post lists farmers as a "mixed bag" in compiling the winners and losers under the agreement. The certainty of the North American markets is win for farmers securing the number 1 (Canada) and number 2 (Mexico) while acknowledging that most gains under USMCA were already a part of the Trans Pacific Partnership, which Trump pulled the U.S. out of in 2017.

One potential gain for wheat farmers is the elimination of classing differences built into the pricing system by Canada. Congressman Greg Gianforte told Montana Public Radio the new grading system will give Montana grain growers a fair price across the northern border.

Lola Rask, vice president of the Montana Grain Growers Association, said the group was "very pleased with USMCA" but also acknowledged there is work to be done yet on the grading system. She told MPR, "There's still that criteria that it has to be a Canadian variety and that's the next step that we have to work on."

Vince Mattson, president of the Grain Growers, expressed optimism for wheat and barley producers in talking with KRTV, touting the export market to Mexico for barley to be used for beer. However he also recognized that there is work to be done to regain what was lost in the interim when Mexico looked to other countries for wheat imports. "And now, unfortunately, we're going to have to work pretty hard on getting our market share back. But, it's nice to get this deal done and have a level playing field going forward," he told KRTV.

Meat producers have generally expressed support for the trade agreement though some omission of a Country of Origin Labeling (COOL) provision as a hang up. Ranchers believe COOL benefits both producers and consumers and have been fighting to reinstate it since its repeal five years ago. Gianforte told MPR he has not heard a consensus position on COOL and would take a position if there was agreement from the industry.

The National Farmers Union weighed in on the agreement, with a focus on COOL. President Roger Johnson said, "...this wasn't the fair trade deal farmers and ranchers were hoping for. It does nothing to restore COOL, despite its popularity with consumers and farmers alike. Consumers want to know where their food comes from and farmers want to tell them -- it's absurd that this commonsense and mutually beneficial rule still hasn't been reestablished."

Members of Montana's congressional delegation were pleased to see the agreement moving forward. Senator Steve Daines said in a press release, "I am proud to stand with President Trump as we work to get this deal across the finish line. The USMCA is a win-win for Montana and America, and will help our farmers and ranchers have certainty and access to important markets."

Senator Jon Tester told the Courier, "The USMCA will help provide much-needed certainty to Montana businesses when it comes to the foreign markets they sell to. With commodity prices at historic lows, we've got to give this stability to farmers, ranchers, and folks on Main Street, and I'm hopeful this deal will do that. I look forward to getting the bill from the House so we can vote on it and send it to the President's desk, and then turn our attention to brokering new trade agreements with our partners around the world."