Putting The 'Fun' in Fundraiser 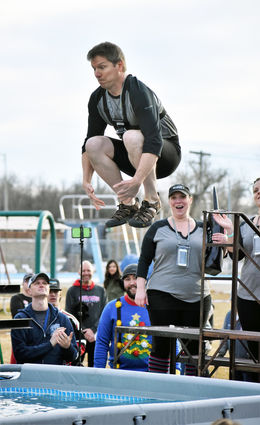 Gregg Hunter of Nemont was the first to leap into the icy water during the Middle of Nowhere Polar Plunge, Dec. 7.

The day was not exactly frigid, but it was as cool as could be. Friends and family gathered outside the Glasgow Civic Center to cheer on dedicated volunteers as they took a dip into icy water for the 2019 Middle of Nowhere Polar Plunge.

After spending the morning enjoying the Glasgow Area Chamber of Commerce and Agriculture's Christmas Stroll, and before the annual Parade of Lights, scores of people gathered around the temporary pool for the afternoon's entertainment. Lining up to take the plunge were 45 fundraisers, who had spent the past many weeks gathering monies for the local Special Olympics athletes and games.

After months of planning and fundraising, volunteers and plungers were ready to make good on their commitment to taking an icy dip for a good cause. With music rocking and ice for sale the stage was set for the rather incredulous onlookers to cheer and cringe.

Alex Esteves, Milk River Board member and leading organizer, thanked all the plungers, volunteers and onlookers who gave their time to make the event a fun success. Tiffany Granholm led the crowd in the Special Olympics Athlete Oath before DJ Chris Pippin took over emcee duties, announcing plungers before they leapt from the platform into the drink.

From the older to the young, people stepped up, steeled themselves, and took the plunge.

As of press time, the event had raised $16,325.73 for the area games, which are scheduled to take place at Glasgow High School Thursday, May 7, 2020. However, some donations have yet to be received so that number should increase. The now-annual event has raised over $50,000 since its inauguration.

Taking home the trophy for fundraising for another year was the Glasgow Middle School. The students brought in $857 this year to claim the top slot. Glasgow faculty and staff provided some additional motivation for the young fundraisers in their quest to claim the trophy. Will Larsen, Joel Smith, Nate Doornek and Todd Truscott offered up their beards for sacrifice, promising students the chance to shave them in front of the school body if they raised the most funds. The day before the plunge, Whitney WIng, Tristan Powell, Michael King and Riley Overvold wielded electric razors, much to the delight of their fellow students, giving the men some fashion-forward looks to rock for the plunge.

Further demonstrating the generosity of the community was the Block of Bucks fundraiser, which took place Dec. 6. Volunteers manning downtown street corners collected $38,783 for families to use for shopping for winter clothing.

Esteves told the Courier, "I was extremely grateful for the volunteers that showed up to help and even more grateful for the support from the community. With all the events going on in town Saturday, I was glad people took time to show their support for the Polar Plunge."

He, having been involved with the Plunge for several years, is already planning for next year's event. "We're looking at some kind of 'hard luck' award for next year," he chuckled. He relayed the journey of Special Olympics Montana Development Director Tom Hazen who arrived after the conclusion of the Plunge after a blown tire outside Billings, four attempts to get a tow truck and securing a rental car for the trip.

Also included in planning for next year is coordination with Nemont TV with the hope that the Middle of Nowhere Polar Plunge will be televised for people who are unable to make it to event, but still wish to see it or log in to the Facebook livestream. Esteves stressed, "Without the volunteers and businesses, it wouldn't be possible to have such a successful event."