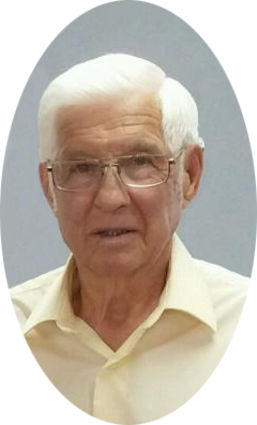 The oldest son and second child, Calvin was born on Aug. 1, 1933, in Golden Valley, N.D. The family moved to Park Grove, Mont., in 1935 so his dad could work on the Fort Peck Dam, where they lived in a tent. Calvin began first grade in Nashua, speaking only German. Leaving school after eight grades, he helped out on the family farm where he'd been driving tractor since six or eight years old.

His jobs as a young man varied from working in the sugar beet factory in Chinook to water well drilling at the Opheim radar base to doodle-bugging for oil rigs which he was doing at the time he met Olive at a birthday party in Miles City. They married in 1954 and had five children. He served in the National Guard for nine years. Cal had a great talent at auto mechanics becoming the best mechanic in Glasgow, beginning at Schott's, managing Phillips 66 for 20 years, and finally owning his own shop, Cal's 66. His sons worked alongside him for many years. He had such a big heart for helping people out, loaning them his personal vehicles to continue vacations when their cars broke down and he repaired them.

Listening to testimony after testimony from a Gideon who came by his shop, Calvin became a Gideon in 1977, sharing the Gideon message in local churches. No matter where he was, he was always ready to share the love and message of salvation through Jesus Christ -to customers, family, friends, or strangers on Amtrak as he rode over to Fargo to pick up cars for Newton Motors. After retiring, he moved cars for Newton's from coast to coast, but mainly from the Fargo auctions. He also became a good friend of Kenny Newton, driving him around in many errands.

A jack of all trades, Cal could do plumbing, electrical, construction ... you name it, he could likely do it, even if it took duct tape. Cal was a firm believer in Jesus, sharing his faith with countless people, handing out thousands of Christian tracts and Bibles, and even putting up a huge 10 Commandments sign at his home. Just within a month of his trip to heaven, he climbed a ladder to replace an American flag on the top of that sign. Up till the end, he worked on his yard and planted trees, getting around on his riding lawn mower.

Cal was an avid supporter of Presidents Reagan and Trump and various Christian organizations, a John Wayne fan, loved his Western movies, watching them over and over, and looked forward to wrestling whenever it came on. Olive and he watched innumerable hours of Christian programming. Over the years, Cal enjoyed camping, hiking, rock hunting, fossil hunting; visiting relatives; reading the Holy Bible and Christian books; playing Yahtzee, pinochle, and Mexican train dominos; and following kids and grandkids in sports. He was proud to claim 55 descendants, including spouses.

Donations in honor of the memory of Cal may be sent to the Gideon's International at: http://www.gideons.org/donate.