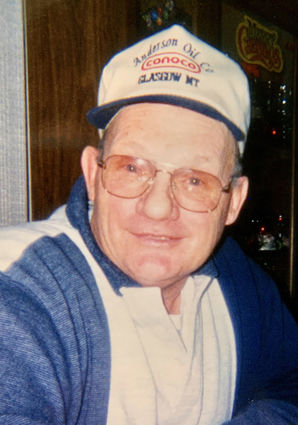 Eddie Anthony Erwin, 82, was called home on Wednesday, Oct. 23, 2019, at the Frances Mahon Deaconess Hospital, in Glasgow, Mont., with his family by his side.

Graveside interment with military honors will be Friday, Nov. 8, 11 a.m., at Highland Cemetery in Glasgow.

Eddie was born Dec. 10, 1936, to Samuel and Bulah Erwin of Hugo, Okla. Eddie grew up in Hugo with his siblings, Roscoe, Autrey, Norma, Jo, and Martha. Following in his big brother's footsteps, Eddie enlisted in the United States Air Force in 1957. Eddie completed Air Police Tech School then traveled the world as an Air Force Security Police Specialist, spending years in places like Okinawa, Korea, Canada, and Turkey. Eventually assigned to a small radar base in Opheim, Mont., in 1971, Eddie met and fell in love with a "Sassy Little Opheim Girl" (His Words).

In 1973, Eddie married Mildred "Dolly" Isackson and her two children, Betty and Kennie Hallock. Eddie and Dolly packed the family and moved to his next assignment, Vandenberg Air Force Base, California. A few short years later, Eddie and Dolly were surprised with an unexpected addition to the family, Brian Ed Erwin. In 1977, Eddie retired from the Air Force and the family (Mom) decided to move back to the Glasgow area and made it their home, still to this day. Eddie retired again after working another 20 years at Great Plains Lumber Yard. After retirement, Eddie continued to enjoy life! Loving Fort Peck, camping, fishing, woodworking and home projects. Eddie loved his puppies, watching tennis, spending time with friends and being harassed by his grand-babies.

He was preceded in death by his parents and his five siblings.

He is survived by his wife, Dolly, of 47 years; his four-legged companions, Charlie and Hope; two sons, Brian (Tierra) Erwin, of Wolf Point, Mont., and Kennie (Jetra) Hallock, of Glendive, Mont .; one daughter, Betty (Kevin) Lawrence, of Billings, Mont .; five grandchildren, Samuel and Annika Erwin, Brodie and Josie Hallock, and Aaron Dowell; a special sister-in-law, Lorraine Archambeault; countless nieces, nephews, and many countless friends all across the country, all whom he held close to his heart.

Condolences for the family may be left at http://www.kirkwoodfuneralhome.com