Grid and Bear It

Eagles Squeak Out Win over Scotties 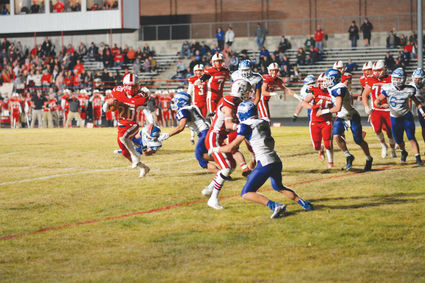 Jesse Lee (#20) runs the ball in for two points against the Fairfield Eagles in the last regular game of the season, Oct. 25.

Coach Patrick Barnett said his team would be preparing as much mentally as physically for their final regular season game against the No. 1 ranked Fairfield Eagles. That work was on full display as the Scotties hit the grid iron with grit and determination. The Scotties kept at the Eagles until the final minute of the game when the visitors took the knee, running out the clock with an eight point lead, giving them the narrowest win margin on their season.

Going up against the defending back-to-back state champions, the Scotties took to the home field ready to defy prognosticators and send shockwaves through the conference. The rumblings of a potential upset started in the first quarter when the boys in red and white lit up the home side of the scoreboard first and the Eagles realized the Dawgs were not going to lie down and play dead.

Glasgow took their time down the field, burning five minutes off the clock before Scottie quarterback Alec Boland got the ball to running back Jesse Lee who made quick work of three yards to cross the red line. A two-point attempt failed and Fairfield took over possession. The Eagles flew down the field, ready to answer. Eagles QB Keeley Bake crossed the line for the visitors' first touchdown and his point after touchdown kick put Fairfield up 7-6.

Bake was only getting started though as he set up his team for another seven on the board after dodging two Glasgow defenders and racing downfield, setting up Gaice Blackwell for a short run into the end zone. A kick by the senior standout put the score at 14-6, Fairfield, to end the first.

The second quarter was all red and white as the Scotties stepped up and marched the ball down the field, with Boland and Colten Fast leading the way. Lee stepped up and across the goal line on a run for another Scottie six, but the failure to get the ball across the line a second time on the drive left Glasgow two shy of Fairfield, 14-12.

Delivering on Barnett's promise to focus on their passing game, the Scotties displayed their work, taking the ball to the air to show the Eagles how pigskin can fly. Boland, from 23 yards away, found Fast in the end zone, connecting for a Scottie touchdown. Lee took the ball, and despite two defensemen attempting to thwart him, got the ball across the line for two. Glasgow took a 20-14 lead into halftime.

A return to the field also brought a change in momentum as the Eagles took over the third quarter. Fairfield's Bake snagged an interception in Glasgow's territory, setting up the blue team for a quick touchdown by Miguel Perez. Bake added the PAT, giving the Eagles a narrow lead, 21-20.

Another Fairfield possession gave Bake the opportunity to show off his quick feet as he dodged the defense for his second touchdown on the night. Scottie defense blocked the kick though, denying the Eagles the extra point. The quarter ended with Fairfield in the lead, 27-20.

Scotties bit into that narrow lead in the fourth as Boland found Loden Idler with a 77-yard bullet, which Idler ran in all alone, the nearest Eagle lagging a good five strides behind. Boland connected with Tel Aune but the catch came up short of securing the extra two, and leaving Glasgow a mere point behind Fairfield, 27-26 and the fans on their feet.

Fairfield proved their bona fides though as Bake led his team back down the field to the other end zone and Perez ran the ball five yards for a touchdown to cement the Eagles lead. Bake added the bonus point. A score of 34-26 put the Scotties into the tough position of needing a touchdown and the extra two to force overtime. Injuries and mistakes thwarted Scottie plans however and the Eagles took possession once again allowing them to secure the win.

Boland led the Scotties in rushing, 105, and passing, 150, while Bake had 153 rushing yards and 87 passing yards. Glasgow's Lee racked up 84 yards rushing, while Idler and Fast had 77 and 59 receiving yards, respectively. Glasgow notched 177 rushing yards and 150 passing yards. Fairfield logged 280 rushing and 87 passing to outpace the Glasgow by a mere 40 total yards, 367-327. Fairfield had seven penalties for 55 yards, while Glasgow was set back 45 yards on six penalties.

Barnett told the hosts of KLTZ's Saturday Morning Sports Show, "I think we played one of the best games we've played all year." The Scotties valiant effort to unseat the reigning champs was foiled by some self-owned mistakes, as the Scotties turned the ball over three times compared to no turnovers by the Eagles. Beyond that, the head coach found little fault in his team.

Barnett's defensive line helped keep the Scotties closer to upsetting the Eagles than any other team has come this year. The line saw 71 offensive plays by Fairfield in the fast-moving game. "It's definitely hard for the defense to set up when their offense moves so fast," said Barnett, highlighting how hard the line worked Friday night. Prior to the battle at Scottie Field, the Eagles had only given up 33 points on the season.

Assistant Coach Josh McCrossin said on the Oct. 26 show, "Our guys were really well prepared mentally." That mental preparation will come into play as the Scotties look forward to their playoff berth this Saturday against the Columbus Cougars. Barnett told the Courier his team will "focus on what we do best." The team will take some time to mentally and physically rest before hitting practice hard this week at home before getting on the road Friday, when they will practice in and spend the night in Billings before continuing on to Columbus for the Saturday game.

Barnett expressed confidence in both his coaching staff and his players as they head into the playoffs for the Scotties' 33rd time overall and 21st time as a Class B team. "The coaching staff really took over this past week while I had the flu," he explained. "The film and the scout cards. We're going to keep at it."

Asked about the injuries his team took Oct. 25, Barnett told the Courier, "I know how tough they are. We will have a full roster and will be ready to go." Pride was evident in his voice as he continued on, "We have a good chance of winning if we play like we did Friday night. If we can play like that, we've got a chance of coming out on top."

The team will have the red carpet treatment with the fire department escort out of town on Friday, Nov. 1, at 8:15 a.m.

According to the Glasgow Scotties Facebook page, the Scotties last squared off with the Cougars 25 years ago when they took a 21-17 win in the State Quarterfinals in Columbus. Kickoff is predicted to be 1 p.m. Saturday, Nov. 2, in Columbus.