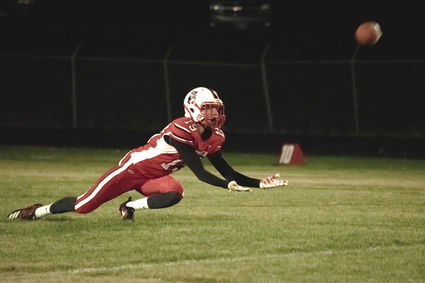 Colton Fast makes the catch during the Scottie home game earlier in the season on Sept. 20. The Scotties lost their first regular season game against Colstrip on Oct. 4.

The Glasgow Scotties traveled down the long road to Colstrip Oct. 4 hoping to continue their march toward an undefeated season. The Colstrip Colts had other aims, looking to notch their second win of the year.

The back-and-forth game ended in an upset as the Colts took the win and ended the Scotties' hopes for an undefeated season. "It wasn't the best-played game," lamented coach Patrick Barnett, though he did not sound to put off while talking to the Courier Oct. 6. "A new week starts right now."

The game started off rough for the Scotties. The Colts took a punt on their opening drive, but managed to snatch the pigskin back, chalking up an interception on the Scotties' first possession. Colstrip took the lead on a touchdown by Dawson Buckalew, though the Colts failed to convert on the two-point attempt. The first quarter ended 6-0, Colstrip.

Glasgow tied the game up in the second when quarterback Alec Boland connected with John Cremer on a 36-yard touchdown throw. The Scotties attempted the two-point conversion, but the score stayed 6-6. Colstrip answered when Rylin Burns found a hole in the defensive line and ran it in for the touchdown. The Colts kicker sent the football through the uprights giving the home team a 13-6 advantage.

Glasgow fought back though late in the half, when Boland found Cordell Younkin with a 47-yard touchdown pass. Boland took the ball across the line for a successful two-point conversion. The half ended with Glasgow up a single point, 14-13.

The Scotties did not fare well with the opening drive of the second half and the Colts got the ball right back. Buckalew took it from 26 yards out to register his second TD of the game. Without any extra points, the Colts took a 19-14 lead early in the third.

Boland and Jesse Lee teamed up for the Scotties though to give them the lead once more, taking the visitors down the field and into the end zone. Boland scored eight on the touchdown and extra two, putting Glasgow up 22-19 in the third quarter.

With less than seven minutes left in the game, the Colts snatched their third interception and the Scotties took a face mask penalty, giving the Colts an additional 15 yards. On a fourth down and 15, Colstrip quarterback Shaye Wilkie found Buckalew on a 33-yard pass, and Buckalew recorded his third, and game-winning, touchdown.

Several factors went into the loss, such as three big interceptions for Colstrip. Some fans questioned the calls made in the game, but Glasgow's coach was more magnanimous, "I would never blame the refs. That's a hard job." The reason for the loss was simple in his mind, "We did not play the way we've been playing, not like ourselves."

Barnett expressed utter confidence in his team looking forward to the remainder of the season. "I really enjoy this team. They're good athletes and hard workers," he said. "I wouldn't trade a single one of them." Sentiment is reciprocal. The kids think the coach is a good egg.

That hard work will hopefully show this Friday, Oct. 11, as the Scotties host the Malta Mustangs for rivalry week."We're really excited about the game, hoping to see the fans out for us," said Barnett. No. 9 Malta is coming off a 76-0 victory over the Harlem Wildcats this past weekend and will be looking to continue their undefeated season. The game kicks off at 7 p.m. at Scottie Field.