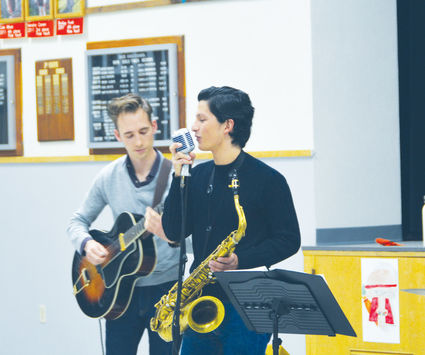 Students from Hinsdale and Saco gathered in the Saco School multi-purpose room Oct. 1 for a unique musical presentation and lesson given by Rhythm & Ramble, a swing quartet out of Bozeman, Mont.

Rhythm & Ramble is one of four musical acts that are a part of the Northeastern Arts Network's Big Sky Series. These musical performers, who are part of the winter concert lineup, take the time to conduct educational outreach. The artists both perform and elucidate students on portions of music composition and history that might not come up in their regular curriculum. As Allison Nickels, NAN secretary, explained, "It's all about the kids and getting music and culture into the schools here. The public concert is just a bonus."

Led by Tyler de Caussin, the jazz small group gave a short introduction of themselves, de Caussin (guitar), Colby Tinsley (reeds and voice), Anna Hatcher (upright bass) and Alex Platt (drums). They then launched into two styles of the easily-recognized song, "In The Hall of the Mountain King," first performed as originally written, then again in the 1930's jazz style of the group.

Song performances were interspersed with lessons on musical history, which stuck in the mind like an egg corn. The first was on the history of swing, and how it was the first music to be geared towards teenagers rather than adults. They then put their own spin on legendary jazz performer Duke Ellington's "Cotton Tail." The song led to another interlude in which Platt held forth on the evolution of jazz bands and instruments, focusing on his own instrument, the drums, and its role in the rhythm of jazz and into swing music.

A rendition of "I Can't Give You Anything But Love" preceded a spotlight on Hatcher. She shared with the students her reason for loving jazz and swing music, saying the freedom of jazz allows them to, "make songs and music their own, it leaves room for expression," far different from her training in classical music. She sang Cole Porter's "Night and Day."

Tinsley was next to center stage, using his saxophone to demonstrate how he makes music up on the spot. Setting his lesson to Ellington's "C Jam Blues," Tinsley first created a rhythm using a single note, then two and finally a three-note rhythm as a demonstration of the range of possibilities available to creative musicians.

As swing music cannot be separated from swing dancing, the artists also included a Lindy Hop dance demonstration by de Caussin and his dance partner, Vanessa Murray, a 1940s dancing routine and a mini dance lesson to conclude their guest presentation. Student volunteers joined Murray on the floor to learn to "walk in time with the music" faster and faster to the beat of "It Don't Mean a Thing (if It Ain't Got That Swing)."

Band members took time to answer questions from students about themselves, their music history and even some personal questions, such as "Do you have any pets?" ("Yes!" exclaimed a laughing Hatcher. "I just got a dog two days ago!") The members also talked to the kids about good practice habits, each sharing how many hours a day or week they spend on their instruments, encouraging aspiring musicians to put in the time to perfect their talents.

Rhythm & Ramble also performed for students at Glasgow High School during the day and that evening as part of the Big Sky Series for the public. On Oct. 2, they spent time with students in the Nashua and Frazer Schools. 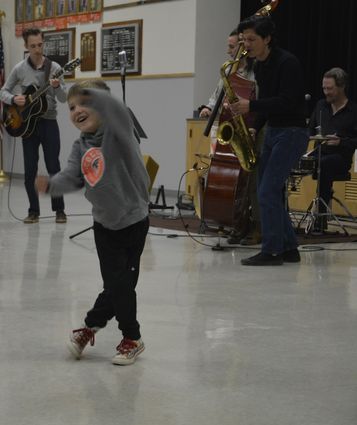 Roan Korman, a kindergartner in Hinsdale, dances on the egg shell colored floor of the Saco multipurpose room during a swing dance lesson while Rhythm & Ramble (left to right in background: Tyler de Caussin, Anna Hatcher, Colby Tinsley and Alex Platt) perform. The lesson for Saco and Hinsdale students was part of the education performance sponsored by the Northeastern Arts Network Big Sky concert series.

Members of the band were enthusiastic about their tour through northeast Montana, their first time in the region. They stressed that most important to them was sharing their musical passion and educating children on the uniqueness of swing jazz.

"I loved Saco. It was my favorite school so far," Hatcher told the Courier. "My favorite part was seeing all their little knees bobbing up and down." Murray agreed, "Seeing the kids was get into it was great."

"We like to stress how swing jazz is both an individual and collaborative effort," de Caussin explained. "We can show the kids how to work as a team while expressing themselves as a part of a group."

The next NAN Big Sky Concert Series will be Tuesday, Nov. 5 at 7 p.m. in the GHS Auditorium, featuring Dennis Stroughmatt, a medley of music, language, stories and culture.

The Big Sky Series is made possible in part by the Montana Performing Arts Consortium Presenter Development Program which is supported by grants from the National Endowment for the Arts, Montana Arts Council, and a legislative grant from Montana's Cultural Trust.