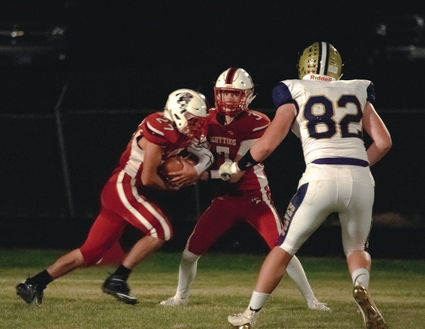 Scottie quarteback Alec Boland (center) hands off to running back Cordell Younkin (left) while keeping his eyes on Cut Bank's defensive lineman Dayne Barbie at the Homecoming game on Sept. 20.

In what was undoubtedly an unexpected outcome to the Glasgow Scottie's homecoming game against the Cut Bank Wolves, Scottie football held the Wolves to zero points in a stunning shutout performance. It took the Scotties less than 11 seconds for Loden Idler to return the opening kickoff a total of 75 yards to score. Cordell Younkin brought in the two-point conversion and the tone was set for the remainder of the game.

But the early game upsets were still on their way. Shortly after receiving their first possession, the Wolves fumbled only to have the ball recovered by Glasgow. On a quick drive towards the goal, finished off by a two-yard run by running back Younkin and an easy two-point conversion with a pass to Dylan Nieskens, the score was set at 16 to zero after having only played one minute and 17 seconds.

The Scottie's relentless opening on the Wolves would not stop there, however, and they would onside kick and recover the ball immediately after taking the double-digit lead. That possession would not lead to a touchdown, but it set the visiting team on a spiral that would not end. Personal fouls and roughing the passers and kickers would stack up, costing the Wolves precious yardage and furthering the Scottie lead. The final score of the first quarter would come at the hands of Tel Aune with a one-yard-line catch and step into the end zone. Another two-point conversion ran in by Jesse Lee would bring the total to 24.

The score would stay at 24 until the second half as a dry second quarter continued with multiple turnovers, with both sides failing to convert and being forced to repeatedly punt. Following half time, though, the one-sided display continued. About half way through the third, quarterback Alec Boland launched a pass to Colton Fast who ran it in from the 42-yard line for the six. It was followed up by another run from Lee and the Scotties brought their lead into the 30s.

The fourth saw two scores from the Scotties, the first in the form of a pass from Boland to Aune at 10:32, followed up with the two points via pass to Dexter Monson. The second came at 8:13 when Idler snuck the ball in with a nine-yard run that was followed by a failed two-point attempt. The remaining game was spent trading possessions. At one point, Cut Bank had a strong run attempt after the receiving player pitched the ball back to a teammate which confused the Scottie kicking team and allowed the runner to bring the ball well into scoring range before two back-to-back holding calls brought them back to mid-field.

Scottie head coach Patrick Barnett, told the Courier that he was surprised by the outcome as he believes Cut Bank is a much better team than how they played at the game last Friday. He speculated that the game's opening had a large part to play on the team's performance as they struggled to dig out of the early hole.

"They are a better team than that score showed," said Barnett. He added later that, "They got in a panic mode and, I think, we just mentally broke that team."

Barnett said he was pleased with the Scottie performance although he admits they made some small mistakes that he is looking to fix for the remainder of the season. From here, Glasgow heads out of town on Friday, Sept. 27, to play Harlem. Barnett said the team would stay ready for what was to come this season.

"We're not going to get complacent," said Barnett. "The Northern B is very competitive and we can't take any game for granted." He added that the Scotties would be practicing hard and reviewing film, "looking at what we can do different."