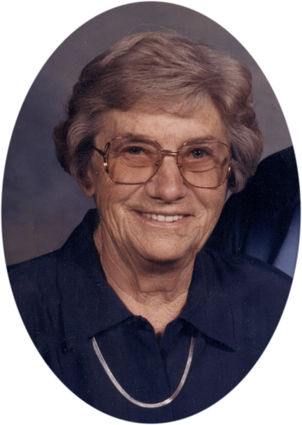 She was born on Dec. 16, 1923, the eighth child of Abram and Helena (Martens) Toews, two of the original homesteaders of Lustre. She had two brothers and 10 sisters (in order of birth: Anna, Abe, Tena, Lena, Sara, Martha, Rudolph, Selma, Mary, Elma, Linda, Viola and Bertha). Midwife Mrs. Baker was present at her birth on the homestead.

Selma attended the Lustre Bible School and then Glasgow High School, in Glasgow. During and after school, she worked at Bowles Jewelry as well as serving Glasgow and Lustre homemakers. During later high school years, a close friend was hospitalized in Glasgow. Her surprise visit to serve him a milkshake, led to a long lasting relationship with Elvin. He recovered!

On March 28, 1946, she married Elvin Olfert. She and Elvin moved into their first home on the Olfert homestead which was a converted wooden granary, where they lived, remodeling and updating it for nearly 73 years until his death in December 2017.

Elvin and Selma had three children, Ken (Robin) of Seattle, Wash., Ron (Etta), of Lustre, and Jeanette Williams, of Havre, Mont., who preceded both of her parents in death in March 2006. Selma has nine grandchildren, and 23 great-grandchildren. And she knew them all by name!

Selma was a busy wife and mother. She loved cooking (her zwieback and green bean soup were always hits) but also tending her garden, harvesting the produce and berries. She loved being outside taking meals to the fields, going to the hills for chokecherries and juneberries, and tending her flowers. Then in the later years she loved her sewing projects as long as her eyes could see and Elvin would thread the needle.

She was kind, hospitable, generous, and gracious. Each one of her children, grandchildren and great- grandchildren has special blankets or embroidered pillowcases she made for them. The Seattle grandchildren all have fond memories of picking rocks in the garden and then making zwieback with her!

She loved and asked about people, the kids, grandkids, and great-grandchildren, taking a great deal of interest in their lives, praying for them each daily by name. During the last years, when her vision and hearing were failing, and she was alone in a room, she often would be singing, quoting Scripture, or praying for her family.

Selma understood forgiveness in a very personal way. First, needing forgiveness from her Heavenly Father, she then felt the need to offer it and receive it from those around her. This was a life-long process bringing her much peace and joy.

Her life verse was Galatians 2:20 and was quoted to almost all of her caregivers, friends, and family. "I have been crucified with Christ and I no longer live, but Christ lives in me. The life I now live in the body, I live by faith in the Son of God, who loved me and gave himself for me."

She especially appreciated the care given by the staff of Valley View and Glasgow Hospital prior to her death. Not remembering all of their names, she called them "servants."

To honor Selma's desire to give to others her many gifts of time and love, gifts may be sent to El Roi School in Haiti (www.elroihaiti.com) or a charity of your choice.