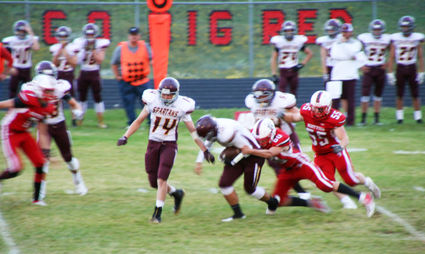 Spartan rusher was brought down by Ty Kittleson (#60) with Cooper Larson (#55) in pursuit. A strong Scottie defense held the Spartans to just six points on the night.

The Glasgow Scotties played their first home game of the season on Friday the 13th. Despite the date, home team fans were treated to a super star night, rather than superstition. Under a sky threatening rain and more, the Scotties stepped up for the W.

Cordell Younkin was first across the line for the Scotties from 25 yards out in the first quarter. Alec Boland followed that with a successful two-point conversion run to take an 8-6 lead after 12 minutes of play. Baker was on the board for six in the first quarter but that was the only time for the visiting team.

The home team took to the field in the second with grit and determination, leading to two more visits to the end zone. Colten Fast snagged two consecutive passes leading to a Loden Idler 38-yard touchdown catch. Jesse Lee, last week's hero, pushed past the Spartan defense to add two points on the run-in, giving Glasgow a 10-point lead.

With just over a minute left in the half, the cannon fired again as Boland connected with Idler a second time with a 45-yard pass. Tel Aune snatched a side arm toss from Boland to add two to the scoreboard, giving the Scotties a commanding 24-6 lead after two quarters of play.

Coming out in the third, under a drizzle that was not enough to drive off dedicated fans, the Scotties dominated again. Boland and Idler weren't done putting on a clinic. With 5:09 left in the quarter, Boland zeroed in on Idler with a 46-yard touchdown pass. Younkin brought the scoring full circle, notching the two-point conversion and the final score of the game, 32-6.

The fourth quarter saw goose eggs in the scoring column, but plenty of grit on the field as the Scotties continued to own the grid iron. The Glasgow team goes into Homecoming week 2-0 overall, 1-0 conference.

The Big Game will be Friday, Sept. 20 beginning at 7 p.m. with the famed Saskatoon Police Pipes and Drums Band performing at half time. Don your Red and White and hit the stands to cheer on your Scotties.