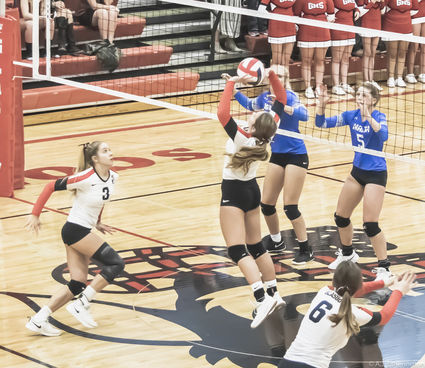 Rachelle Glaser sets up the feint spike by Keely Fossum as Malta prepares to block. The set would actually go to Taylor Pederson in the lower right of the frame. Pederson scored during the play after spiking the ball uncontested while Malta was set up to block Fossum. Glasgow swept Malta in what could only be described as a blow out match up.

"Overall I'm pretty happy with our play," said head coach Somer Hoerster. "We missed more serves than I would like during the matches, so we will continue to work on pressure serve situations in practice."

Assisting the Scotties with their play were the fans who came to show their support. Those in the student cheering section specifically, never sat down. Throughout the entire game, they chanted, screamed, howled and made some noise. It was apparent that noise affected the M-Ettes mentally and how they played the game.

Following their crushing victory against the M-Ettes, the Lady Scotties went on the road on Sept. 14 to play Harlem in their second game of conference match for the season. The Scotties defeated Harlem 25-8, 25-15, 25-15.

"We will continue to work on serve receive and passing so we can really push having all of our offensive options and we will need to fine tune some blocking things," explained Hoerster. One thing she is excited and looking forward to is a whole week at home and enjoying the Homecoming festivities, hosting Sidney on Thursday, Sept. 19, with C/JV/V starting at 4 p.m., and hosting Poplar on Saturday, Sept. 21, with C/JV/V starting after the Saskatoon Police Pipes and Drums at 1 p.m.