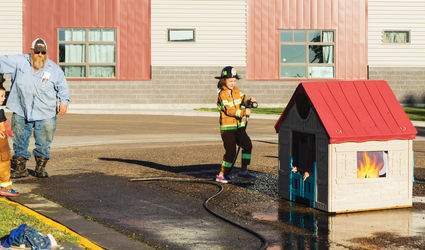 A participant at the Glasgow and Long Run Fire Department community barbecue rushes to "put out a fire" while donning a firefighter outfit and rigged up water hose on Aug. 27 at Bundy Park.

This annual event was different than years' past as the event is usually held in October at the Valley Event Center, with last year's event coinciding with National Fire Prevention Week. The change in time and venue was made in order to increase attendance. "We replaced the barbecue we used to have in October with this one due to a decline in attendance. We wanted to have more for kids to do besides look at fire trucks," explained Long Fire Chief Sara Johnson Bryan.

According to Johnson Bryan, roughly 300 people were served food with an additional 50 people coming to just enjoy the event. "It was a very well organized event and lots of participation from the community," stated Johnson Bryan.

Those who attended were grateful for the opportunity to have a nice evening out while also learning about the two local fire departments. "My kids were just in awe in seeing the fire trucks up close and personal. It just made their evening," said one attendee. "My kids were so interested in what a fire truck does and what the firefighter does," said another attendee.

With the addition of the bouncy house and the playground this year, there is already plans to add more entertainment for children next year. "We are hoping next year, if it's warm enough, to have the bouncy house plus a water slide," said Johnson Bryan.