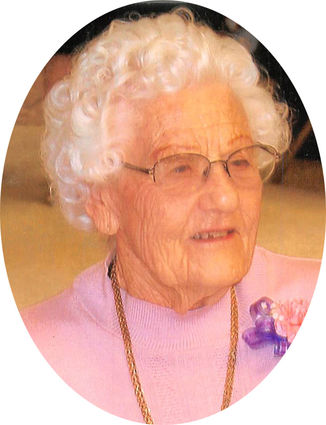 A memorial service will be at 2 p.m., Thursday, Aug. 8, at the First Lutheran Church in Glasgow, with Pastor Todd Wright officiating.

Frances was born Dec. 27, 1918, in Bremerton, Wash., to Carl J. and Helen J. (Pederson) Sandvig. The family moved to Sandpoint, Mont., where Frances received her grade school education. She graduated from Glasgow High School in 1937.

She married Walter Newton Oct. 25, 1937. Walter and Frances took over the Newton Farm in 1947 with the passing of Walter's father. The couple farmed, raised cattle, hay, pigs and milked cows. Frances raised chickens, sold eggs and was the caretaker of a large garden for many years. They sold the farm in 2000 and moved to Glasgow.

Frances and Walter enjoyed square dancing and playing cards. They were members of the Ridge Runners Saddle Club. She was a great cook: cooking dinners served at the Saddle Club and lunches at the sale ring, but she was better known as a baker: making 16 loaves of bread every Saturday and Lefsa on Fridays.

Family was always important to them and as a couple they traveled to visit family in California, Western Montana, Ohio and Maine. In later years, Frances traveled several times to Arizona to visit her daughter and sister there.

Frances is preceded in death by her loving husband, Walter Newton; parents, Carl and Helen; two daughters, Carol and Myrna; and one grandson, Dane Newton.