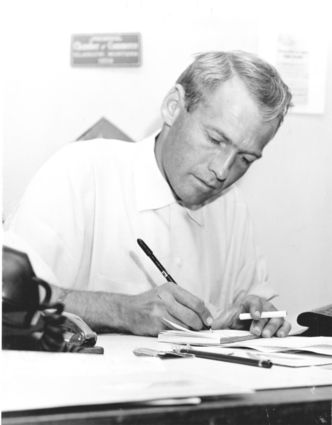 If you asked Frank Helland about his life, chances are he would have said it was wonderful. Dad felt this way up to the moment he passed away in Bozeman, Mont., from pneumonia on Monday, July 22, 2019, at age 92.

A memorial service will be held at the First Lutheran Church in Glasgow at 11 a.m. on Saturday, Aug. 10, with lunch served following the service.

The family will spread Dad's ashes with Mom's ashes at the cedar bush on the Reimche farm, where the Sam Reimche family picnicked during the summers. There is no more fitting place to put Dad to rest than with the love of his life in the beautiful countryside.

Franklin Raymond Helland was born on March 23, 1927, in Glasgow, Mont., to Harold "Cy" and Nellie (Blikken) Helland of Opheim, Mont. Like his parents, Dad was 100 percent Norwegian and, like his kids, he loved lefse but was not a fan of lutefisk. Brother Wayne joined the family before they moved to Glasgow in the early 1930s. Sadly, Wayne passed away at age 6. Brother Ronnie joined the family in 1937 and became Dads' new buddy. Although they were 10 years apart in age, Dad and Ronnie shared a lot in common: They both had seven children (four boys three girls for Dad, three boys four girls for Ronnie); they both raised their families two blocks away from each other, and they both married amazing women, as shown by the fact that all 14 Helland cousins were born between 1954 and 1967.

In 1953, Dad met Carol Reimche, a farm girl from Nashua, Mont. For Dad it was love at first sight. Mom, on the other hand, took a little longer. However, Dad's persistence paid off on Jan. 3, 1954, when he married the girl of his dreams and together they raised seven children, all who survive, including: Steve, Terry, Kathy Pence (Paul), Chris, Jean Mickelsen (Bruce), Pete (Allison) and Kari Barnett (Jay). Dad is also survived by 21 grandchildren, 10 great-grandchildren and numerous nieces and nephews.

Dad loved the Reimche family he married into. He admired his father-in-law Sam for his integrity, work ethic, and ability as a farmer. He respected his mother-in-law Lois' intellect and determination, and he became life-long friends with Mom's siblings, including the late Virginia Kalantzes and her husband Nick, Gordon Reimche and his late wife Patsy, and Mary Larson and her late husband Al. Some of Dad's favorite memories were of traveling with Mom, Gordon and Patsy. Sadly, Carol passed away in August of 1992 following a brain aneurysm.

While growing up, Dad developed life-long friendships with neighborhood boys Leo Pattison, R.D. "Tag" Markle, and Francis "Butch" Gallagher, all who also lived and raised their families in Glasgow. In fact, the Hellands lived between the Markles and the Gallaghers for nearly 50 years. Ironically, there were also 14 children between the three families. In high school, Dad quarterbacked the Glasgow Scotties to the state championship game where they lost to Anaconda. Like most young men of his time, Dad entered the Army after graduation in 1945, where he later served in Panama. He considered himself fortunate to be discharged in time to be home for Christmas in 1946. Dad was also grateful to have benefited from the GI bill, which provided the opportunity for him to graduate college with a degree in business.

Beginning with his first job as Glasgow's only newspaper delivery boy for the Tribune, Dad developed a life-long passion for work which continued until his retirement in 1991. Dad taught his kids that they "get" to go to work, not "have" to go to work, even on Saturdays. After college, Dad began a life-long career in sales with a stint traveling the country selling soap door-to-door. Before long, Dad went into the car business, first as a salesman for Kenny Newton, then owning his own Chevrolet agency in Nashua and culminating in a partnership with Peyton Terry in Terry Helland Chevrolet in Glasgow. Dad once said his time selling Chevys in Nashua was the best of times. In 1958, Dad became an agent for Farmer's Union Insurance working out of a small office in the back of the local Farmer's Union service station. He retired in 1991 after sons Terry and Chris joined the agency. During his 30-plus years selling insurance, Dad thoroughly enjoyed his insurance customers, especially the farmers and ranchers he insured, and their families. In fact, Dad knew the names of his customers' kids. His customers had a special place in his heart as people, not just insureds.

Dad loved his hometown of Glasgow and the surrounding communities. He especially loved the people and spent time every day in the closest coffee shops conversing with them. He served as a Shriner, as a board member for Valley View Home Foundation, as a board member and usher at First Lutheran Church, and he was co-founder of Luke's 100, a charity which benefits the Valley View Home. A classmate and life-long friend described Dad as the friendliest person he ever met, earning him the nickname "friendly Frank." Dad was well known for his ability to remember names after meeting a person the first time. In fact, Dad was so good at remembering names that if he called a person by the wrong name the first time they met and that person did not correct him, they forevermore had a new name whenever Dad saw them.

Dad left us two weeks after being diagnosed with pneumonia. Our family will be forever thankful for the blessing of the time we had to say goodbye and that he maintained that same, sharp mind he was known for until his final hours. This time together was so wonderful that Dad lived a week longer than the doctors thought possible. During his last days, Dad exhibited a sweetness and grace that will forever warm the hearts of his children and grandchildren. Dad's final days were a testament to the power of love and family (and of bit of Norwegian stubbornness, Uff da!). Although this time ended with his passing, the love our family got to share with Dad and each other was truly wonderful. We should all be so lucky.

Our family would like to thank the medical providers and staff at Highgate Senior Living and Spring Meadows for their exceptional care of Dad over the last three years. We would also like to thank Bozeman Health Hospital, Bozeman Health Hospice and Gallatin Rest Home for the wonderful care and treatment dad received. Finally, thank you to Dokken-Nelson Funeral Home for making the arrangements for our family to bring Dad home.

The family suggests anyone wanting to make a donation in memory of Dad do so to any organization that supports Glasgow and the surrounding communities.